Asian shares mixed in quiet trading ahead of US Fed decision 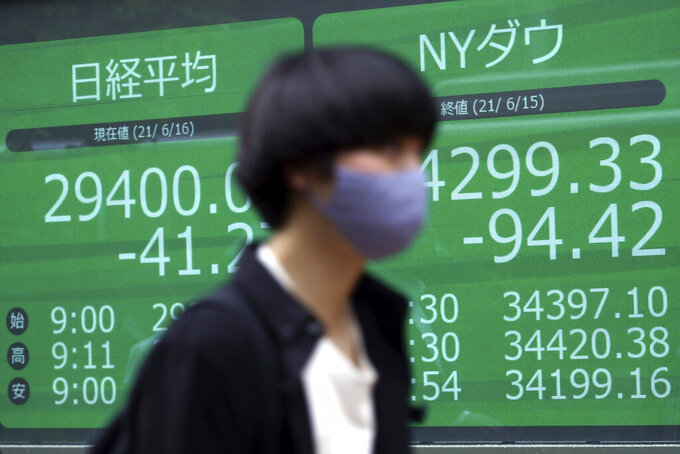 A woman wearing a protective mask walks in front of an electronic stock board showing Japan's Nikkei 225 and New York Dow indexes at a securities firm Wednesday, June 16, 2021, in Tokyo. Asian shares were mixed in quiet trading Wednesday ahead of a U.S. Federal Reserve meeting that may give clues on what lies ahead with its massive support for markets. (AP Photo/Eugene Hoshiko)

TOKYO (AP) — Asian shares were mixed in quiet trading Wednesday ahead of a U.S. Federal Reserve meeting that may give clues on what lies ahead with its massive support for markets.

Japan released data that showed its trade surplus jumped 49.6% in May from the previous year, but analysts said that was less than expected and highlights how the world's third largest economy and its exports may be only slowly recovering from the pandemic.

Investors are also watching data out of China on industrial production and retail sales for indications about the health of the regional economy.

“Asian markets are quiet ahead of the Fed,” said Robert Carnell, regional head of research Asia-Pacific at ING. “China’s data dump may stir things up a bit today, but the main focus will be on the Fed’s message and any hints they may give.”

On Wall Street, the S&P 500 dipped 0.2% to 4,246.59 as the Federal Reserve began a two-day meeting on interest-rates and other policies. A day earlier, the index hit an all-time high amid optimism about the economy.

The S&P 500 was down as much as 0.4% earlier in the day, after a report showed inflation on the wholesale level leaped last month by even more than economists expected. Prices for producers were 6.6% higher in May than a year earlier, the highest since 2010 and the latest evidence that inflation is bursting higher across the economy.

The fear is that if higher inflation gets entrenched, the Fed may pull back on the $120 billion in monthly purchases of bonds it's pledged to keep mortgages cheap and longer-term interest rates low, and might raise short-term interest rates off their record low.

The Fed has so far said that it sees higher inflation as temporary. It will announce its latest decision on rate policy Wednesday afternoon.

“From a prices standpoint, we’re seeing inflationary pressure, and we believe the jury is still out on the timing and extent of when we see a leveling or whether this new new normal of higher prices is cemented,” said Greg Bassuk, founder and CEO of AXS Investments.

Most economists expect the Fed to say again on Wednesday that it sees higher inflation being only temporary, which would allow it to hold steady on its support for markets. But they also say Wednesday afternoon could offer the first sign that the Fed is mulling when to start slowing its purchases of bonds.

Many investors agree with the Fed’s view that higher inflation won’t last very long, and that it’s the expected result of an economy escaping out of pandemic lockdowns. A survey of fund managers said that 72% say inflation is only “transitory,” according to BofA Global Research. That has the majority saying that any upcoming drop in stock prices would likely be less than 10%.

There are limited signs that inflation may be cooling in some parts of the economy. Lumber and copper prices have dropped from their highs of a few weeks ago. Copper sank another 4.3% Tuesday, and miner Freeport-McMoRan's stock fell 4.8%.

Other reports on the economy Tuesday painted a mixed picture. Retail sales fell 1.3% in May from April, slamming into reverse after a 0.9% gain the prior month, for a much steeper drop than economists expected.

Part of that is likely the fading effect of payments the U.S. government sent to households earlier this year, which boosted spending in March and April. But economists said it could also be a sign that Americans are buying less and spending more on travel, eating out and other services as the economy reopens.

In energy trading, benchmark U.S. crude gained 62 cents to $72.74 a barrel in electronic trading on the New York Mercantile Exchange. It gained $1.24 on Tuesday to $72.12 per barrel. Brent crude, the international standard, added 64 cents to $74.63 a barrel.