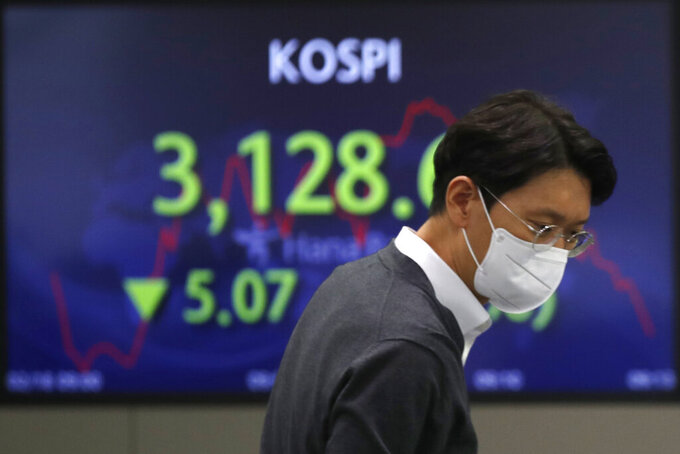 A currency trader walks near the screen showing the Korea Composite Stock Price Index (KOSPI), at the foreign exchange dealing room in Seoul, South Korea, Thursday, Feb. 18, 2021. Shares were mostly lower in Asia on Thursday after a mixed session on Wall Street as losses by technology and industrial companies offset other gains. (AP Photo/Lee Jin-man)

BANGKOK (AP) — Shares were mostly lower in Asia on Thursday after a mixed session on Wall Street as losses by technology and industrial companies offset other gains.

The yield on the 10-year Treasury note held near its highest level in a year, at 1.27%. Bond rates have risen on expectations that pandemic recoveries will push inflation higher, and that has capped buying enthusiasm, as investors have sold to lock in recent gains.

The U.S. Labor Department reported Wednesday that U.S. wholesale prices surged by a record 1.3% in January, led by big gains in health care and energy prices. The bigger-than-expected increase was the largest one-month gain on records that go back to 2009.

Underscoring signs of recovery, the Commerce Department said U.S. retail sales soared a seasonally adjusted 5.3% in January from the month before, the biggest increase since June and much larger than forecast.

Optimism that rollouts of coronavirus vaccines will set the stage for stronger economic growth in the second half of this year have been pushing shares higher.

The yield on the 10-year Treasury slipped to 1.27% from 1.28% late Wednesday, near its highest level in a year. The rise in bond yields has raised some concerns about the potential for higher inflation, but has also been a sign that the prospect for economic growth remains good.

The Dow Jones Industrial Average rose 0.3% to 31,613.02, a second straight record high. The modest pickup was due in large large part to gains in Verizon Communications and Chevron, which climbed after Warren Buffett’s Berkshire Hathaway said it made major new investments in them in the second half of last year.

Energy prices rose again, adding to a sharp increase the day before due to the frigid weather that’s impacted much of the U.S.

U.S. benchmark crude oil gained 59 cents to $61.73 per barrel in electronic trading on the New York Mercantile Exchange. It surged $1.09 to $61.14 per barrel on Wednesday. Brent crude, the international standard, climbed 80 cents to $65.14 per barrel.

The strong retail sales data appeared to reinforce the perception that inflation is picking up even before the Biden administration has delivered on its proposed $1.9 trillion stimulus package and other spending aimed to get the economy back on solid footing.

That could eventually lead the Federal Reserve to rethink its current policy of keeping interest rates at ultra-low levels.

Fed Chairman Jerome Powell has cautioned that inflation could accelerate for a time in coming months as the country opens up. But he and many private economists believe this will be only a temporary rise and not a sign that inflation is getting out of control.

Last month’s jump in retail sales was largely driven by the $600 stimulus checks that went out to most Americans in late December and early January. The data shows that recession-hit Americans are eager to spend cash on necessities, and aren’t saving the funds — which is the goal of stimulus checks.

It potentially means that additional stimulus, likely in the form of $1,400 checks in the $1.9 trillion stimulus plan, will likely provide a necessary boost to the economy.