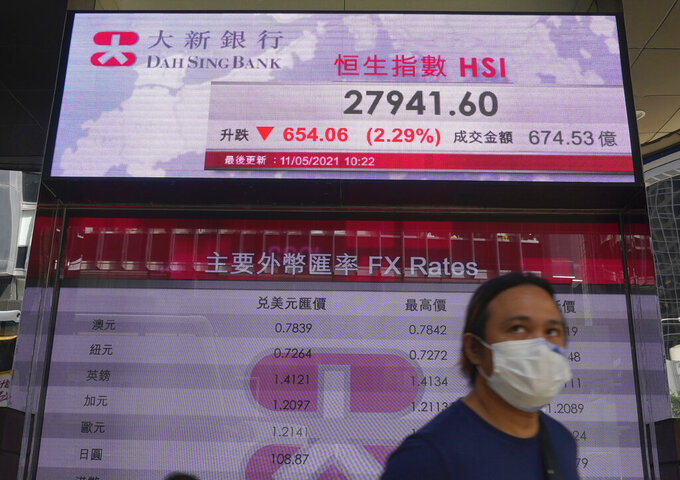 Markets are watching for U.S. and Chinese consumer and producer prices due out this week, he said.

On top of that, a number of Asian countries are seeing rising coronavirus infections and deaths that are straining health systems and setting back progress toward vanquishing the pandemic.

Australia's S&P/ASX 200 lost 1.1% to 7,094.30. The government is due Tuesday to release a big-spending economic plan for the next fiscal year designed to create jobs and repair pandemic damage and with an eye toward winning votes at looming general elections.

Shares fell in other regional markets.

The wave of selling handed the Nasdaq its worst day in more than seven weeks, as the index is heavily weighted with big technology stocks. The tech sector, which led the market's stunning comeback in 2020, now lags the other 10 sectors in the S&P 500 so far this year with a gain of 3.9%.

Inflation has been a concern for investors since bond yields spiked earlier this year, but yields have mostly stabilized since then. The yield on the 10-year Treasury eased to 1.59% from 1.61% late Monday.

Rising commodity prices have begun to push prices of some consumer products higher but analysts expect increases to be mild and tied to the growing economy.

Though the employment market has been lagging the recovery, other measures show that the economy is pushing forward. Consumer confidence and retail sales are regaining ground as people get vaccinated and businesses reopen. Americans set a record for pandemic-era air travel on Sunday, according to The Transportation Security Administration.

In other trading, U.S. benchmark crude oil lost 52 cents to $64.40 per barrel in electronic trading on the New York Mercantile Exchange. It gained 2 cents to $64.92 per barrel on Monday. Brent crude, the international standard for pricing, gave up 57 cents to $67.75 per barrel.