Asian stocks fall back after Wall Street advances to record 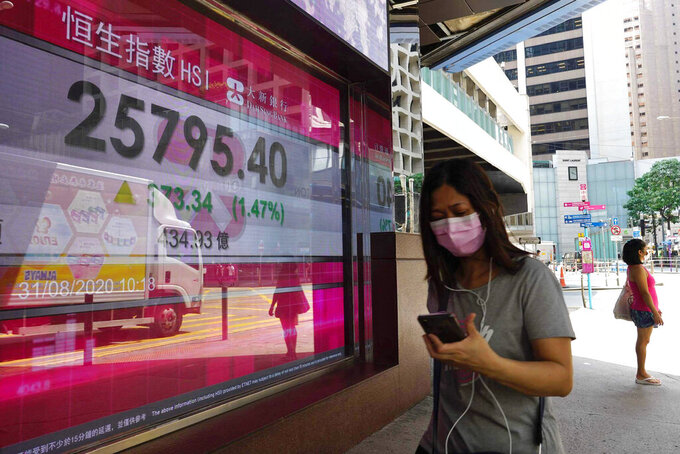 The Nikkei 225 in Tokyo advanced 1.1% to 23,139.76, rebounding from heavy selling Friday after Prime Minister Shinzo Abe’s announcement that he was resigning.

The index also was lifted by gains of between 4% and 9.5% in major trading companies after investor Warren Buffett's Berkshire Hathaway announced it had invested in long-term stakes of just over 5% in the five companies.

India's Sensex opened up 0.5% but then retreated, losing 0.6% to 39,220.21. New Zealand, Jakarta and Singapore retreated while Bangkok gained.

Global stock markets have recovered most of this year’s losses despite rising coronavirus infection numbers in the United States, Brazil and some other countries.

Wall Street’s benchmark S&P 500 index is at a record high, propelled by big gains for technology stocks investors expect to do well despite the pandemic. But most stocks in the index still are down.

The Dow Jones Industrial Average rallied 0.6% to 28,653.87. It returned to positive territory for the year.

Benchmark U.S. crude oil gained 12 cents to $43.09 per barrel in electronic trading on the New York Mercantile Exchange. The contract slipped 7 cents on Friday to settle at $42.97. Brent crude, the international standard, rose 22 cents to $46.03 per barrel in London.