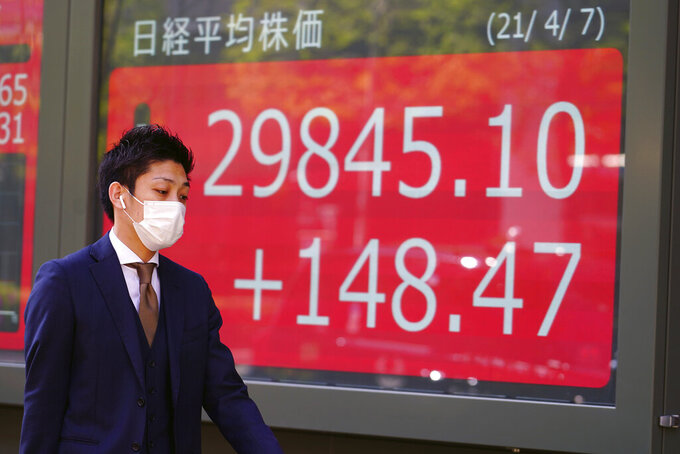 President Joe Biden said he is bumping up his deadline for states by two weeks, to April 19, to make all adults in the U.S. eligible for coronavirus vaccines, reflecting steady progress in the U.S.

Optimism about a global economic rebound from the pandemic is growing, but Venkateswaran Lavanya at Mizuho Bank's Asia & Oceania Treasury Department noted some nations were lagging in a “divergent recovery."

“To be sure, the aggregated growth assessment is upbeat. Global GDP contraction for 2020, at 3.3%, was not as bad as the 4.4% drop expected earlier,” Lavanya said, referring to gross domestic product.

The International Monetary Fund said it expects global economic growth to accelerate this year as vaccine distribution ramps up and the world rebounds. The 190-country lending agency said it expects the world economy to expand 6% in 2021, up from the 5.5% it had forecast in January. That would be the fastest expansion in IMF records dating back to 1980.

Trading in Toshiba Corp.'s shares was halted after the Tokyo-based technology conglomerate confirmed it had received a preliminary acquisition proposal.

Toshiba Corp. said it was seeking more details on the proposal, giving it “careful consideration” and would make an announcement “in due course.” The Japanese financial newspaper Nikkei reported that CVC Capital Partners was looking into acquiring the company for 2 trillion yen ($18 billion).

CVC is an international private equity and credit company that has committed nearly $162 billion in funds, managing more than 300 investors. It declined to comment.

Toshiba, founded in 1875, was long revered as one of Japan’s most respected brands but in recent years has been mired in scandals and burdened by its investments in nuclear power. After the March 2011 nuclear disaster in Fukushima, its costs ballooned because of growing safety concerns and a souring of sentiment toward nuclear power in countries like Germany.

On Wall Street, stocks finished slightly lower, pulling the market back from all-time highs reached a day earlier. Technology and health care stocks accounted for much of the decline.

Financial stocks fell as bond yields eased. That countered broader gains from companies that are depending on continued economic growth to recover. Oil prices rose.

Recent market gyrations mostly reflect varying assessments of the health and speed of the recovery from the pandemic.

Vaccine distribution is speeding up the reopening of businesses, while government stimulus is helping shore them up in the interim.

Even as that shift occurs, technology and other stocks that benefitted from the shutdowns still look fundamentally strong, said Jeff Buchbinder, equity strategist at LPL Financial.

“We’re seeing this battle play out here in markets every day,” he said. “That’s going to drive some churn.”

The Labor Department in the U.S. reported that job openings reached the highest level on record in February, a harbinger of healthy hiring and a hopeful sign for those looking for work. That upbeat report follows encouraging reports over the last week on job growth and improvements in the services sector, which is one of the hardest hit areas of the economy from the pandemic.

In energy trading, benchmark U.S. crude edged up 9 cents to $59.42 a barrel in electronic trading on the New York Mercantile Exchange. It gained 68 cents to $59.33 per barrel on Tuesday. Brent crude, the international standard, rose 7 cents to $62.81 a barrel.