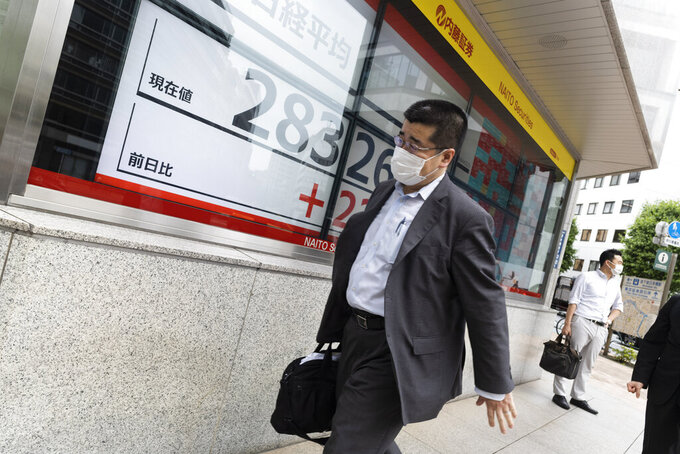 A man walks past monitors showing Japan's Nikkei 225 index at a securities firm in Tokyo Friday, May 21, 2021. Asian shares were mixed Friday after a rebound on Wall Street broke a three-day losing streak. (AP Photo/Hiro Komae)

Benchmarks rose in Tokyo, Taipei and Singapore but fell in Hong Kong and Shanghai.

Investors were encouraged by the latest U.S. jobs data showing fewer Americans filing for unemployment benefits, another sign that the economic recovery is underway.

A preliminary survey of manufacturing sentiment in Japan, the purchasing managers index or PMI, showed a weakening in May from the month before. A similar trend was seen in services, which are most affected by precautions ordered recently to counter the country's worst-ever surge in coronavirus outbreaks. States of emergency have been declared in Tokyo and some other cities and regions, with more expected to follow.

“The plunge in the services PMI from 49.5 to 45.7 marked by far the largest drop since the first state of emergency last April and left the index at a nine-month low," Marcel Thieliant of Capital Economics said in a commentary.

“It suggests that the more draconian measures imposed during the third state of emergency, including the closure of department stores, bars and restaurants, are weighing on activity."

Technology and communications stocks accounted for much of the rally. Apple rose 2.1% and Google’s parent, Alphabet, rose 1.6%. Nearly every sector in the S&P 500 made gains, though a drop in oil prices dragged energy sector stocks lower. The sector remains the biggest gainer so far this year with a 36% gain.

Investors continue to be focused on the potential for inflation down the road. Prices for everything from gasoline to lumber have been rising sharply this year as the economy reheats after the pandemic, and investors have been worried that high inflation may cause the Federal Reserve to pull back on its stimulus efforts.

Part of that decline may be fueled by Republican governors who have opted not to allow their residents to claim the $300-a-week supplemental benefit that came with the latest economic relief package. The move could be pushing more people back into the labor market.

Treasury yields mostly fell, despite the positive economic data. The yield on the 10-year Treasury note was steady at 1.63%.

The price of Bitcoin regained ground lost earlier in the week, adding 7.2% to $40,868.10, according to the online brokerage Coinbase.

In other trading, U.S. benchmark crude oil picked up 15 cents to $62.09 per barrel in electronic trading on the New York Mercantile Exchange. It lost $1.94 to $61.94 per barrel on Thursday.

Brent crude, the international standard, added 3 cents to $65.14 per barrel.