Asian stocks rise after US rally on infrastructure deal 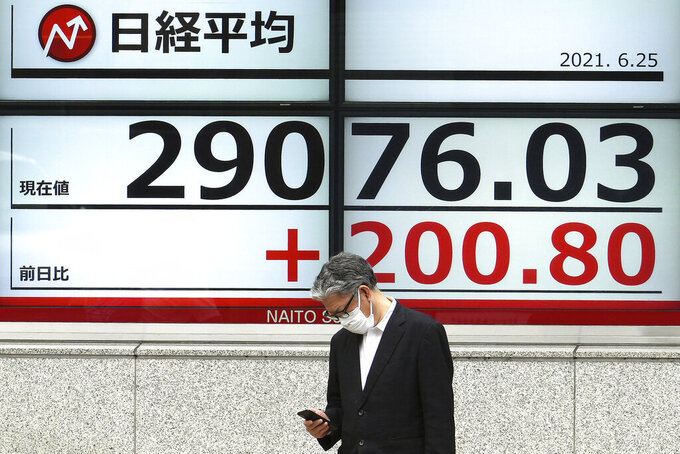 A man wearing a protective mask stands in front of an electronic stock board showing Japan's Nikkei 225 index at a securities firm Friday, June 25, 2021, in Tokyo. Asian shares are rising, buoyed by the rally on Wall Street that came after President Joe Biden announced a bipartisan deal on infrastructure spending. (AP Photo/Eugene Hoshiko)

“The breakthrough in infrastructure spending talks overnight has lifted sentiments, with spending plans historically being a positive for the markets," said Yeap Jun Rong, market strategist at IG in Singapore. "Sectors leaning towards economic recovery and reopening may see strength."

A recovery in the U.S. economy is a boon for this export-driven region. Although the vaccine rollout in Asia has lagged most parts of U.S. and Europe, the perk from an overseas recovery is likely to come long before herd immunity against the coronavirus pandemic.

On Wall Street, the S&P 500 marked another record high, beating the peak it set early last week. Stocks added to their gains in the afternoon after Biden announced the infrastructure deal, which is sure to benefit companies in the construction industry.

Caterpillar rose 2.6% and Vulcan Materials gained 3.3% on the news.

The plan, costing $973 billion over five years, is the culmination of months of talks, and a larger spending plan from Biden is still possible later this year.

Chris Zaccarelli, chief investment officer for Independent Advisor Alliance, said the proposed agreement is favorable for industrials, financials and energy stocks, although “the general re-opening of the economy and renewed, post-Covid-19 economic growth is the most likely driver” of the market going forward.

Markets have calmed since the Federal Reserve surprised investors last week by saying it could start raising short-term interest rates by late 2023, earlier than expected, if recent high inflation persists.

The super-low rates the Fed engineered to carry the economy through the pandemic have propped up prices across markets, and any change would be a big deal, so the Fed’s announcement triggered selling of stocks and a rise in Treasury yields last week. However that selling reversed this week. The three major indexes are all up more than 2% this week and are once again near records.

Investors had little negative reaction to a report that 411,000 Americans filed for unemployment benefits last week, down 7,000 from the week before. That was a much more modest decline than expected, and the second week in a row where unemployment benefits claims stalled after declining steadily for months.

Meanwhile, orders to U.S. factories for big-ticket manufactured goods rose for the 12th time in the last 13 months in May, pulled up by surging demand for civilian aircraft. The Commerce Department said Thursday that orders for durable goods — meant to last at least three years — climbed 2.3% in May, reversing a 0.8% drop in April and coming despite a backlogged supply chain and a shortage of workers.

Rite Aid plunged 14.5% after the drug store chain said it expects to report a loss for the year, due to pressure on its pharmacy benefits services and lower-than-expected sales.

BuzzFeed announced it would go public with an implied value of $1.5 billion through a merger with a special purpose acquisition company. The media company will trade under the ticker BZFD but has not chosen a stock exchange yet.