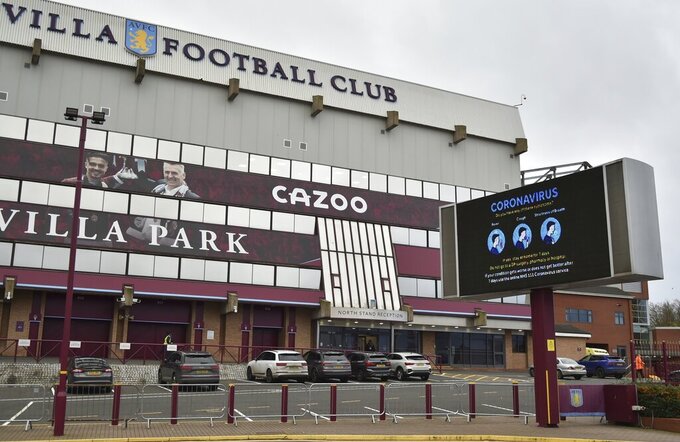 The Premier League club canceled first-team training ahead of Friday's match. Villa is also scheduled to host Tottenham in a league game next Wednesday.

“The Football Association and Aston Villa are working closely together to try to ensure that the club's third round proper fixture with Liverpool can go ahead as planned at Villa Park tomorrow evening,” the club said Thursday evening.

“Final confirmation will be made (Friday) pending the results of additional COVID-19 testing,” it added.

The club said “ a large number ” of players and staff returned positive tests following routine testing on Monday, and they “immediately went into isolation.”

“A second round of testing was carried out immediately and produced more positive results today,” Villa said earlier Thursday.

Earlier, Southampton's third-round FA Cup game against Shrewsbury scheduled for Saturday at St. Mary’s Stadium was called off after the third-division team reported a coronavirus outbreak.

The League One club said “several members” of its squad and staff tested positive. It wasn't immediately clear if already tight schedules will allow the game to be played at a later date.

“Shrewsbury Town informed us that there have been a significant number of positive COVID-19 cases at the club, such that they did not have a sufficient amount of fit, non-isolating players who would be able to play in the fixture,” the FA said.

The FA asked for more information regarding Shrewsbury's "ability to fulfill the fixture," and said its Professional Game Board will meet early next week “to make a decision as to what will happen with the fixture.”

Elite sports have continued even as Britain faces a more contagious variant of the coronavirus. A third national lockdown that started Tuesday requires everyone in England to stay at home for at least the next six weeks, with limited exceptions.

“I fear football might succumb in the next few weeks,” England great and TV pundit Gary Lineker said Thursday on Twitter.

The Manchester City women's match against West Ham was called off after City reported “four positive COVID-19 cases and a number of other mitigating factors."

Arsenal's women's team said one player tested positive this week, resulting in self-isolation for several players and the postponement of its game against Aston Villa.

City's men's team has also been navigating through an outbreak.

United States goalkeeper Zack Steffen again stepped in for Ederson — out after contracting the coronavirus — to start in City’s 2-0 win over Manchester United in the League Cup on Wednesday. Earlier in the day, reserve goalkeeper Scott Carson and midfielder Cole Palmer were added to the positive list.

City had six players missing for Sunday’s 3-1 win at Chelsea in the Premier League because they had contracted COVID-19 — Ederson, defenders Kyle Walker and Eric Garcia, midfielder Tommy Doyle, and forwards Gabriel Jesus and Ferran Torres.

Derby will instead send a group of under-23 and under-18 players to play in the third-round game, Derby chief executive Stephen Pearce said Wednesday. He said nine players and staff within the first-team bubble had tested positive.