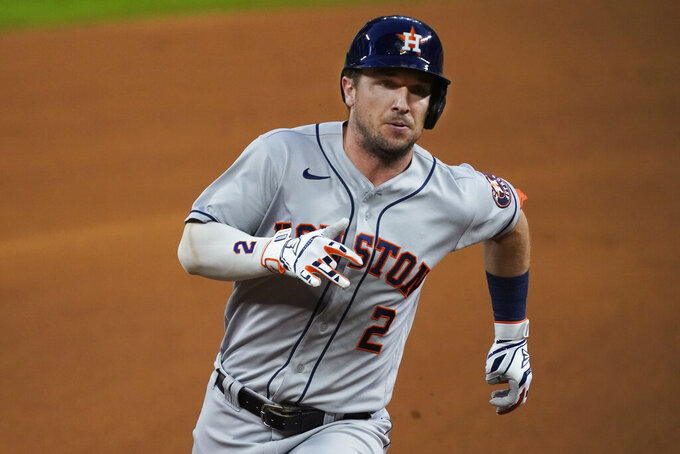 Houston Astros' Alex Bregman heads to third with a triple during the first inning of the team's baseball game against the Texas Rangers in Arlington, Texas, Thursday, Sept. 24, 2020. (AP Photo/Tony Gutierrez)

ARLINGTON, Texas (AP) — The Houston Astros are on the verge of clinching the American League's last playoff spot, powered by some of their mainstays in a breakout performance that certainly excited manager Dusty Baker.

“I’m just hoping that these guys are about to get hot,” Baker said.

Just in time for the postseason.

George Springer, Jose Altuve, Alex Bregman and Josh Reddick all homered with runners on base, and each finished with three hits, as the Astros trimmed their magic number to one for clinching the American League’s last playoff spot with a 12-4 win over the Texas Rangers on Thursday night.

“I think that’s what we should be doing. We're a very good offense,” said Bregman, who had three extra-base hits. “It's repeating. We've had a few games this year I thought we swung the bat well, but we didn't really repeat it, so now it's time to repeat, repeat, repeat, repeat, and keep doing that."

The Astros (29-28) have to win only one of their three remaining games against Texas to secure second place in the AL West, and a spot in baseball’s expanded playoff during the pandemic-shortened season. They also get in if the Angels (26-31) lose any in their final three-game series against the NL-best Dodgers.

Houston’s three-year reign as AL West champion has already been ended by Oakland. Seattle had the day off when the Astros won to eliminate them from the playoff chase.

Bregman, Springer, Altuve and Reddick have been part of the recent playoff runs with the Astros, including their 2017 World Series title and another AL pennant last year.

A’s right-hander Mike Fiers was the whistleblower in the Astros’ offseason sign-stealing scandal. He publicly called out his former club for cheating in an article published by The Athletic last November. Manager AJ Hinch and general manager Jeff Luhnow lost their jobs after MLB’s investigation into the claims.

“It's kind of a sour taste in our mouths just to see the way that finished off," Texas manager Chris Woodward said. “That doesn’t change the way he pitched for us all year."

The 10 runs allowed were a career high for the 33-year-old Lynn, who has another year left on his Texas contract.

“I’d like to do a little better, but that happens," Lynn said.

Javier struck out six while allowing three runs over 5 2/3 innings. The right-hander walked one, hit a batter and threw three wild pitches. He held the Rangers without a run until Willie Calhoun’s two-run homer in the sixth.

“Javier was exceptional for five innings, he ran out of gas a little bit,” Baker said.

Maybe it was all the sitting around during those big innings for the Astros.

Lynn threw at least 100 pitches in all 13 starts this year, and in 36 in a row since May 2019. That matches the longest streak ever for a Texas pitcher, and third third-longest in baseball since pitches were first tracked in 1988. Justin Verlander had 80 in a row with the Detroit Tigers from 2010-12, while Randy Johnson had streaks of 38 and 37 games.

Texas (19-38), which has lost four in a row, will finish at the bottom of the AL West. ... Rangers slugger Joey Gallo was 0 for 4, and has only three hits in his last 35 at-bats, dropping his batting average to .171 — the lowest among 144 qualifiers in major league baseball. ... A wild throw by catcher Dustin Garneau was only Houston’s second error in 23 games.

Rangers: Rookie 3B Sherten Apostel left the game because of back spasms after an awkward diving attempt to field a ball in the second inning. “We’re not quite sure what the extent of the injury is, but it obviously didn’t look good when he was walking off the field,” Woodward said.

Jose Urquidy (1-1, 2.78 ERA), who started the season on the injured list after a positive COVID-19 test, starts for the Astros when they try to clinch their playoff spot.