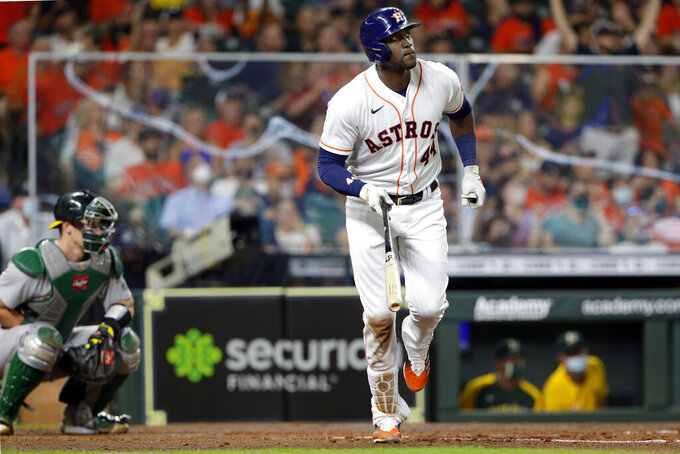 Houston Astros' Yordan Alvarez watches his home run as he heads to first base, next to Oakland Athletics catcher Sean Murphy during the sixth inning of a baseball game Thursday, April 8, 2021, in Houston. (AP Photo/Michael Wyke)

HOUSTON (AP) — The Houston Astros insisted they weren’t bothered by the angry crowds they faced on the road to start the season.

But what a feeling it was to hear the cheers of the home crowd once again.

“It was a beautiful night," José Altuve said. “Kind of like a dream come true."

Carlos Correa, Yordan Álvarez and Altuve homered as the Astros kept up their hot start by treating the home crowd to a 6-2 win over the Oakland Athletics on Thursday night in the first game with fans at Minute Maid Park since 2019.

Houston is 6-1 this season, tied for the best seven-game start in franchise history. Five of the team’s wins have come against the Athletics after a sweep in Oakland to start the season. The Astros have outscored Oakland 41-11.

They received a warm welcome from a boisterous crowd of 21,765 in the first game in Houston with fans since Game 7 of the 2019 World Series, which the Astros lost to the Washington Nationals. Capacity was limited to 50% because of coronavirus restrictions.

“It made a big difference," manager Dusty Baker said. “I could see the positive energy on our team."

It was a welcome respite from the reception they received on a six-game trip to start the season. The road crowds inundated the team with incessant boos and chants of "cheaters" in the first chance to berate the Astros since their sign-stealing scheme was revealed in January 2020.

The Athletics fell to 1-7 a day after getting their first win in 10 innings against the Dodgers.

“We’ve been going through it for a while now," Oakland manager Bob Melvin said. “Everybody wants to be the guy that wants to get the big hit. Sometimes you get a little anxious. You’ve got to keep working and pressing forward."

The Astros have shown impressive power to start the season. They've homered in each game and lead the American League with 15.

“This team can hit, and they worked hard during spring training," Baker said. “I’ve never seen guys hit so much. ... These guys they enjoy hitting."

Correa got things going for the Astros with his solo shot leading off the second inning, which barely cleared the short wall in right field.

Álvarez doubled with one out in the fourth before Correa came through again, sending a grounder down the left field line for a double to make it 2-0.

Álvarez’s homer came with one out in the sixth to extend the lead to 3-0. He sent the off-speed pitch from Irvin into the second deck in right field for his second home run this season in his return after missing all but two games last season following surgery on both knees. A two-run single by Myles Straw later in the inning put Houston up 5-0.

Altuve homered off the wall in left-center to pad the lead in the seventh. The crowd erupted as he connected on the pitch, with fans chanting his name as the star second baseman trotted around the bases.

“Tonight was the perfect night for us," Altuve said. “I had a lot of energy through the game because of the fans. It’s something that motivates you and encourages you."

Oakland got an RBI double by Stephen Piscotty and a run-scoring single by Jed Lowrie in the ninth.

Athletics: Placed LHP A.J. Puk on the 10-day injured list, retroactive to Wednesday, with a strained left biceps and selected the contract of RHP Deolis Guerra from their alternate site. To make room for Guerra on the 40-man roster, they transferred RHP Trevor Rosenthal to the 60-day IL. Rosenthal, diagnosed with severe neurovascular compression, had surgery on Thursday in Dallas that included the removal of a first rib.

Astros: Reliever Enoli Paredes left the game with soreness on his right side.

Oakland left fielder Mark Canha on the team's offensive struggles: “We’ve come out of the gates a little slow. We know we’ve got a good lineup and the kind of damage we can do. It’s easy to let those good at-bats slip away from you when the other team gets a lead or you’re playing from behind."