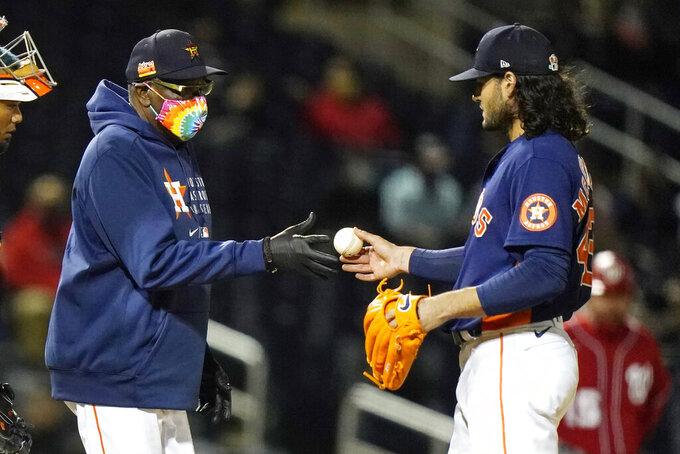 HOUSTON (AP) — After a season spent playing in empty stadiums, the Houston Astros know the return of fans this year could mean a hostile reception on the road from people still angry about their sign-stealing scam.

But after dealing with the fallout from the cheating scandal for more than a year, these Astros aren’t worried about what awaits them this season. They are simply focused on chasing another title.

“Right now, there’s not many things that can phase us,” said shortstop Carlos Correa, one of only a handful of players left from the 2017 and 2018 teams that were found to have cheated. “We have a great team and we’re going to compete. The most important thing is to win games, especially on the road. We want to go out there and beat everybody.”

The Astros finished the pandemic-shortened regular season with a losing record but heated up in October and came within a win of reaching the World Series for the third time in four years.

They return a team largely intact from last season and are favorites to win the AL West for the fourth time in five years behind a lineup featuring Correa, Jose Altuve, Alex Bregman and Michael Brantley.

And their rotation should be solid again despite the absence of ace Justin Verlander, who will miss the season recovering from Tommy John surgery. Veteran Zack Greinke will start on opening day and the Astros are expecting a strong season from Lance McCullers Jr., who has looked sharp so far this spring.

Dusty Baker is back as manager after being thrown into the job last season right before spring training following the firing of AJ Hinch. The 71-year-old Baker said navigating through the pandemic made last season the most difficult of his career, but that it taught him some important lessons.

“It just gives you a greater appreciation of life,” he said. “Every day is important. I wouldn’t be bothered by a lot of things in the past, but I’m even less bothered now because a lot of this that you realize is out of your control.”

Houston’s biggest loss this offseason was center fielder George Springer, who signed a six-year, $150 million contract with Toronto. He’ll be replaced in center field by Myles Straw, who has played 98 games over three seasons for the Astros.

His defensive skills are good, but his prowess at the plate is not comparable to the slugging Springer. Straw has just one home run in 224 career plate appearances while Springer, the 2017 World Series MVP, left Houston with 174 homers in seven seasons.

The Astros made their biggest acquisition of the year this month when they added right-hander Jake Odorizzi to boost their rotation. Houston needed another starter after Framber Valdez fractured a finger this spring.

Designated hitter Yordan Alvarez made his spring debut on Sunday and expects to be ready to start on opening day. Alvarez, the 2019 AL Rookie of the Year, played in just two games last season after being slowed by a COVID-19 diagnosis before having arthroscopic surgery on both knees in August.

“I feel really good,” Alvarez said in Spanish through a translator. “I’m not thinking about my injury, it’s in the past, and it’s something I don’t even have to worry about now because I feel really good, and I’ve put in the work and recuperated fully.”

If Alvarez can return to his rookie form, it will be a big boost to the lineup in the wake of Springer’s departure. Alvarez hit .313 with 27 homers and 78 RBIs in just 87 games in 2019.

Bregman got a slow start to spring training and didn’t appear in his first game until Tuesday because of a sore left hamstring. Baker said Bregman’s health isn’t a long-term concern and that they expect him to be ready for opening day.

Bregman is looking to bounce back this season after a down year in 2020 where he hit .242 with just six homers and 22 RBIs. That performance came after his stellar 2019 campaign where he finished second in MVP voting after hitting .296 with 41 homers and 112 RBIs, which were all career highs.

The only rookie with a chance to crack Houston’s opening day roster is outfielder Chas McCormick. The 25-year-old made the team’s playoff rosters for the AL Wild Card and ALDS last season but did not appear in a game. He could be valuable as the team’s fourth outfielder because he has played all three outfield positions in the minors.

The Astros announced in January that they would allow about 10,000 fans a game at Minute Maid Park this season. But they could increase that number before opening day in the wake of the Texas Rangers’ decision to allow 100% capacity at their ballpark this season after Gov. Greg Abbott lifted coronavirus restrictions in the state.