Athletic trainers adapt to chaos of sports in a pandemic 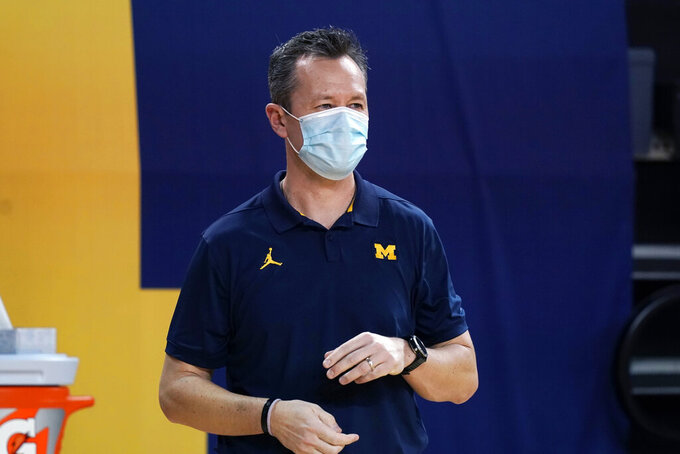 Michigan men's basketball athletic trainer Alex Wong watches from the sideline during the first half of an NCAA college basketball game Tuesday, Jan. 12, 2021, in Ann Arbor, Mich. College athletic trainers have busy lives, trying to keep up with student-athletes' injuries, rehab and making sure they get to doctor's appointments. The coronavirus pandemic has added another layer of work, from testing and contact tracing to keeping up with the latest protocols. (AP Photo/Carlos Osorio)

Collegiate athletic trainers are used to being the calm amid chaos.

Screaming fans, blaring music from loudspeakers, coaches and players caught up in the heat of competition — all of it gets tuned out when a trainer is tending to an injured athlete.

The coronavirus pandemic has added another constantly shifting layer to what they do.

The last 10 months have turned into a complicated juggling act of tending to athletes' day-to-day needs while dealing with the intricacies that come with trying to play sports and keeping everyone safe — themselves included — in a pandemic.

“Athletic trainers by design are the master builders of healthcare in collegiate athletics,” Northern Arizona director of sports medicine Cherisse Kutyreff said. “We tend to juggle so many different balls anyway. It was a little chaotic to start, but it’s our natural tendency when emergencies come up or crises arise, athletic trainers are the ones who sit, try and troubleshoot and come up with solutions. That’s our wheelhouse to be under fire.”

The early days of the pandemic put athletic trainers in a delicate spot of trying to balance treating athletes while protecting themselves and their families against a deadly virus.

As scientists learned more about the complexities of the virus, trainers became more comfortable navigating the uncertain tides of the pandemic.

Culling information from a variety of sources, including each other, they've implemented safety protocols to prevent infections and steered through a new world of testing and contact tracing — all while keeping up with the latest COVID-19 news and recommendations.

And they had to do it while keeping up with the rigors of attending to hundreds of athletes across multiple sports. Days of 12 hours or more are not uncommon.

“They didn’t sign up for this, that’s for sure,” Northern Arizona coach Shane Burcar said. “A lot of times it can be overwhelming. It’s not something you train for, a pandemic, especially with all the changing bylaws and protocols. It’s something where I respect the heck out of our trainer.”

The pandemic forced trainers to alter the way they do nearly everything.

Training rooms were reconfigured with tables spread out for social distancing and limits were put on how many people are allowed in at a time. Masks became mandatory. Cleaning equipment and constant hand washing became a priority. Many schools have gone to appointment-based rehab schedules.

Athletic trainers also have been responsible for determining team safety protocols for practices, games and travel. They test athletes and have to be vigilant with contact tracing to prevent outbreaks. Some even make deliveries to those in quarantine.

“It’s been a challenge for all of us just because of some of the new things that have been put on our plate,” Idaho State head athletic trainer Dustin Enslinger said. “Some of it’s been very challenging as we make sure we’re doing what’s right from a virus standpoint, but also making sure we’re taking care of our student-athletes the way we should be.”

Communication has been key.

The pandemic has increased phone usage exponentially as questions and concerns stream in from all corners of campus.

“Their phones are blowing up every day,” Burcar said.

Athletic trainers also have to keep up to date with the latest COVID-19 information and protocols, then condense and disseminate to coaches and athletes.

They have to know guidelines from the CDC, NCAA, multiple conferences and schools, along with those released by their state and county.

Guidelines are constantly changing and protocols vary widely, so the learning curve is at a constant arc.

“The new information and evidence is coming out with such frequency that being able to get that information, decipher it and determine what we need to change is critical," Kutyreff said.

The efforts have not gone unnoticed.

Coaches and athletes see the work being put in behind the scenes and understand athletic trainers are, in large part, the reason they're able to compete right now.

“I don’t know if there’s a trainer in the world who gets up earlier, stays up later or cares more about doing things the right way for our players than Justin Kokoskie,” Arizona basketball coach Sean Miller said. “He’s been the trainer here for almost 20 years and he’s got a real feel and a great way to encourage our players to stick with it because it’s not easy.”