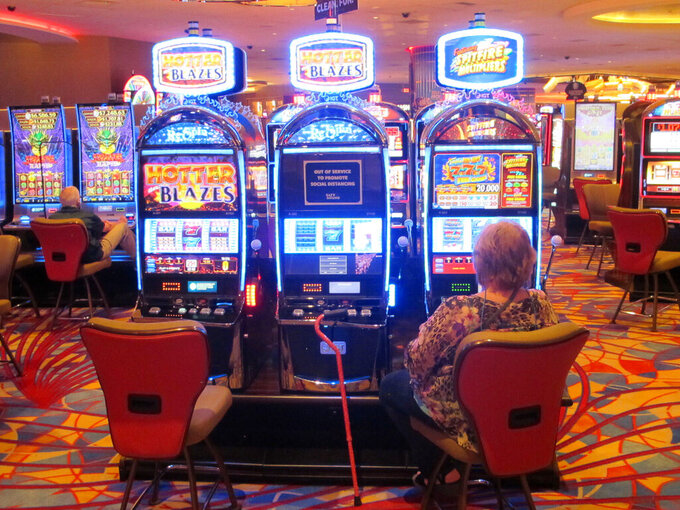 This May 3, 2021 photo shows a woman playing a slot machine at the Hard Rock casino in Atlantic City N.J. On Monday, May 24, 2021, New Jersey gambling regulators released figures showing that the Atlantic City casinos' first quarter earnings more than tripled this year compared to the same period last year, when the COVID19 pandemic wiped out half of March.(AP Photo/Wayne Parry)

Figures released Monday by the New Jersey Division of Gaming Enforcement show eight of the nine casinos posted increases in their gross operating profit, with only Bally's posting an operating loss.

Gross operating profit includes earnings before interest, taxes, depreciation and other charges, and is a widely-accepted measure of profitability in the Atlantic City gambling industry.

Under that comparison, the casinos' first quarter earnings this year are 11% higher than they were in he first quarter of 2019, he said.

“The strength of internet gaming and the safe return of tourists to Atlantic City are a powerful combination,” he said. “Last week’s lifting of casino capacity restrictions bolsters confidence for a strong recovery this summer.”

The market-leading Borgata posted an operating profit of more than $29 million during the quarter, up more than 28% from the same period last year. The Tropicana earned $16.2 million, up nearly 128% from last year, and Harrah's earned $9.5 million, up 224%.

The figures generally comport with nationwide statistics showing the casino industry is recovering from the economic hardship of the pandemic.

Earlier this month, the American Gaming Association, the casino industry’s national trade group, said the nation’s commercial casinos took in more than $11.1 billion in the first quarter of this year. That matched the industry’s best quarter in history, the third quarter of 2019.

The figures do not include tribal casinos, and only represent money taken in by casinos before paying expenses and debts.

Just over half Atlantic City's casino hotel rooms were occupied in the first quarter of this year, with the average room rate set at nearly $131 a night. The Ocean casino had the highest average room rate at $175, while Resorts had the lowest-priced at $91.

Jane Bokunewicz, coordinator of the Lloyd D. Levenson Institute of Gaming, Hospitality and Tourism at Stockton University, said revenue and hotel occupancy figures for the first quarter of this year were up from the fourth quarter of last year. She called that “further sign that the industry is recovering. As the last restrictions are lifted, there is every reason to expect to see even stronger recovery in the second and third quarter data."