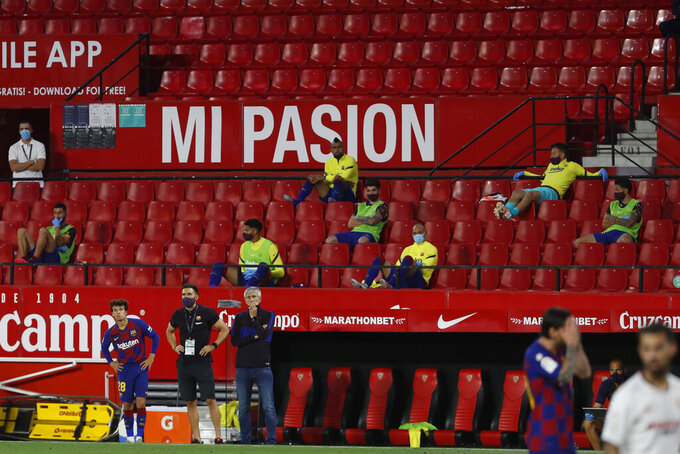 BARCELONA, Spain (AP) — Atlético Madrid honored the club’s victims of the coronavirus pandemic and earned a hard-fought victory Saturday in its first home game since the Spanish league resumed.

Barcelona leads the league by three points over Real Madrid, which can pull level if it wins at Real Sociedad on Sunday. Madrid holds the tiebreaker between the two in case of a tie. Atlético and Sevilla trail Barcelona by 13 points with eight games left.

Atlético used the occasion of its first match at the Wanda Metropolitano Stadium in more than three months to pay tribute to its former coach Radomir Antic, three former players, and a 14-year-old youth player who died during the pandemic.

A jersey with Antic’s name was placed on a seat next to Simeone on the bench, while the four players had shirts with their names draped on seats in the empty stands. A violinist played the club’s anthem to honor all of Spain’s over 28,000 virus victims before kickoff. The game, like all matches in the league since it resumed, was played without fans.

“It is wonderful to be back in our stadium,” Simeone said. “Our fans were not here in person, but they were so in spirit.”

Vitolo went on in the 73rd and broke the deadlock when he headed in after goalkeeper José Caro failed to punch a corner away, leaving his goal undefended. The ball fell to Vitolo at the far post and he guided his header home.

Despite Valladolid coach Sergio González making nine changes to the regular lineup, his team appeared comfortable absorbing the hosts’ attacks and hitting back on the break.

“We knew that Valladolid would be a very tough team to beat,” said Vitolo, who hadn’t played since the competition restarted last week.

“You could tell that Valladolid is well organized and competes hard,” the forward said. “It was tough to find holes in their defense. But the goal keeps us on track to reach our (Champions League) objective.”

Getafe continued to struggle since the league resumed after it conceded an early lead to draw 1-1 at home with Eibar. The Madrid-based club remained in fifth place, just outside the Champions League spots.

Charles scored a header halfway through the game to cancel out Oghenekaro Etebo’s opener for Getafe. A video review waived off a late goal that would have won it for Eibar.

“We aren’t worried, we are angry,” Getafe coach José Bordalás said, adding that his team must rediscover the physical edge that has made it one of the league’s toughest sides.

“In the three games (since the restart), they have beaten us in aerial contests for the ball, and in the previous 27 matches (this season) that had not happened,” Bordalás said. “We are working hard to improve.”

A clever shot with the back of his heel by Iñigo Martínez earned Athletic Bilbao a 1-0 home win against Real Betis. The center back flicked in a low cross to culminate a well-executed set piece in the seventh minute.

Bilbao goalkeeper Unai Simón swatted the ball off his line in the final minutes before Betis forward Sergio Canales squandered a penalty by firing his spot kick well high.

Levante eased to a 3-1 win at Espanyol, which fell back into last place. Levante moved safely into the middle of the standings.