Atlético sticking to match-by-match approach to stay ahead 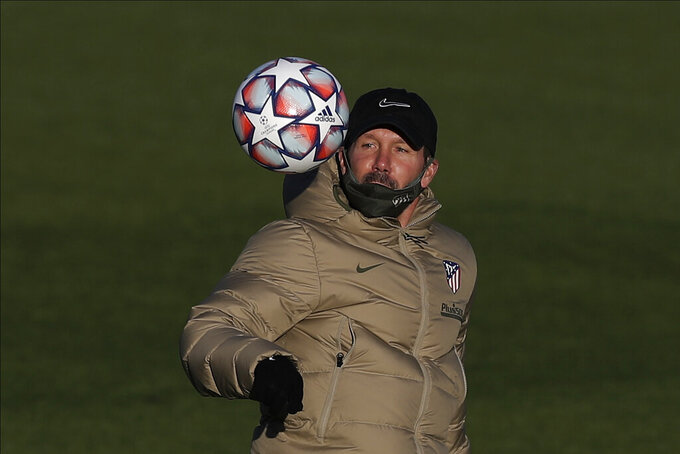 That longstanding mentality at Atlético Madrid under coach Diego Simeone is being put to the test more than ever.

Atlético has built a big lead in the Spanish league entering the halfway point of the season but Simeone and his players know nothing has been won yet, especially in an atypical year in which the coronavirus can still play a big role.

“Every match is an important step toward reaching our goal,” Simeone said. “To stay on this path we need to hold on to the match-by-match mentality.”

Seeking its first league title since 2014, Atlético has a 10-point lead over both Barcelona and Real Madrid with a game in hand. The team has won eight straight league matches and is on pace for a 100-point season.

“These are important numbers that put us at the top,” said Luis Suárez, Atlético's surprise signing after being let go by Barcelona. “It means that the team is doing a great job and has the right mentality to reach its goals. We have to stay on this path.”

Atlético’s next game is on Monday at Celta Vigo, which in winless in six matches in all competitions. Atlético hosts Chelsea in the round of 16 of the Champions League on Feb. 23.

The match-by-match approach has been a trademark of Simeone since he arrived in late 2011, becoming an intrinsic part of his highly competitive squads. To this day he and his players always refer to it whenever asked about the team's chances of winning a competition.

The mentality has gained extra importance this season because of the coronavirus pandemic. Atlético already saw Simeone and Suárez sidelined because of COVID-19, and currently it’s without some of its top players because of the virus — João Félix, Moussa Dembélé, Yannick Carrasco and Mario Hermoso.

They are expected to be back soon but it’s unknown how long it will take for them to regain their best form.

“We will be back playing in the Champions League again soon and we will need everyone,” Simeone said. “We have to live with this situation. It will be like this the entire season.”

Suárez struggled after returning to the team and only recently began thriving again. The Uruguay striker has become key for Atlético, scoring nine goals in the last eight matches, including five in the last three.

Atlético has a reasonably comfortable lead but Barcelona has been making a strong move toward the top recently, having won five straight league games and unbeaten in its last 10. The Catalan club, which on Wednesday qualified for the semifinals of the Copa del Rey, visits Real Betis on Sunday.

Real Madrid, meanwhile, continues to struggle. It visits last-place Huesca on Saturday having won only one of its last five matches in all competitions. Madrid lost at home to Levante in the previous round, and also lost Eden Hazard this week because of a muscle injury. Like Atlético, Madrid has already been eliminated from the Copa del Rey.

Fourth-place Sevilla, which has won six in a row in all competitions, including three straight in the league, hosts Getafe on Saturday.