Audit: US sent $1.4B in virus relief payments to dead people 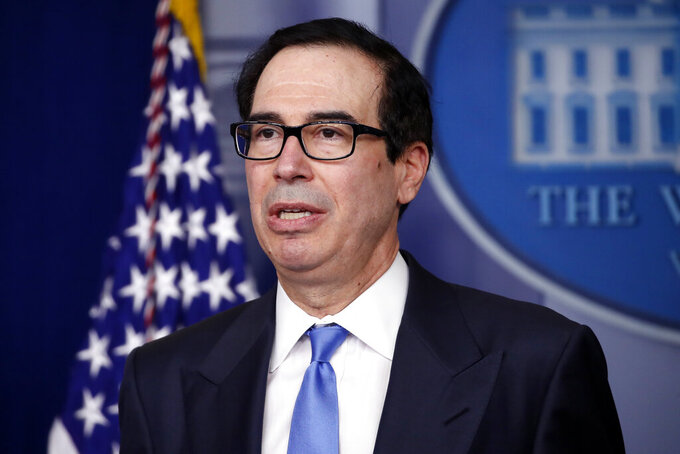 FILE - In this April 21, 2020, file photo Treasury Secretary Steven Mnuchin speaks about the coronavirus in the James Brady Press Briefing Room of the White House in Washington. The Trump administration has abruptly dropped on Friday, June 19, its insistence on secrecy for a $600 billion-plus coronavirus aid program for small businesses. Mnuchin refused to do so at a Senate hearing last week, saying the data was “proprietary information.” (AP Photo/Alex Brandon, File)

As of May 31, about 160 million so-called economic impact payments totaling $269 billion were sent to taxpayers as part of the $2.4 trillion coronavirus relief package enacted in March. The Government Accountability Office, Congress' auditing arm, cited the number of erroneous payments to deceased taxpayers in its report on the government programs.

While the government has asked survivors to return the money, it's not clear they have to.

It also may be a politically sensitive gambit for the Treasury Department to aggressively seek to claw back the money, especially because some recipients may have died in the early months of this year from COVID-19.

When billions in aid are rushed out the door in a crisis, “these are the kinds of things that happen," said Lisa Gilbert, executive vice president of advocacy group Public Citizen.

Gilbert acknowledged the sensitivity of the issue. But, she added, "it's a big number, particularly at this moment when our economy is in free-fall. It's a large amount of taxpayer money that's not doing what it was intended to do."

The errors occurred mainly because of a lag in reporting data on who is deceased. It's a lapse that tax experts say is almost inevitable.

The revelation of more than $1 billion in public money erroneously paid out shines a light on the part of the government's massive relief program with which most ordinary Americans are most familiar. It follows disclosures that several major restaurant chains and other publicly traded companies had received emergency loans under the $670 billion program for the nation's struggling small businesses.

“GAO found that more than $1 trillion in taxpayer funds have already been obligated — including more than $1 billion to deceased individuals — with little transparency into how that money is being spent," Rep. Carolyn Maloney, D-N.Y., chair of the House Oversight and Reform Committee, said in a statement.

The IRS didn't use death records to prevent payments to deceased individuals for the first three batches of payments because of the legal interpretation the agency was operating under, the GAO report says.

The IRS asked in May for the money back from the deceased taxpayers' survivors. Some legal experts have said the government may not have the legal authority to require that it be returned.

Spokespeople for the Treasury Department and the IRS didn't return requests for comment Thursday on the report. Treasury pointed to its current guidance, indicating that the government's position remains that the survivors must return the money to the IRS.

The payments were by paper check, direct deposit or debit card. All adults earning up to $75,000 in adjusted gross income annually were entitled to $1,200; that amount steadily declined for those earning more and phased out for people earning over $99,000. Up to $500 per qualifying child also was paid.

Former Taxpayer Advocate Nina Olson has said there is nothing in the law prohibiting payments from going to the deceased. Nor is there anything in the law requiring people to return the payments. She notes that the language used on the IRS website does not say that returning the payments is required by law.

The relief payments were made to taxpayers based on the information filed on their 2019 or 2018 taxes. But it is considered a rebate on 2020 taxes. The government used the previous tax forms to help speed along payments to the public to offset some of the economic devastation from the coronavirus pandemic.

But some people who filed those taxes may no longer be alive. Those payments are sent to an heir or executor of their estate. If the payment is based off a final tax return completed after their death, an economic impact payment check may even denote, next to that person's name, that the individual is deceased.

“I think the IRS will do little or nothing to pursue collection of these payments,” Keith Fogg, clinical professor at Harvard and an expert in tax law, said Thursday. “The cheapest way for the IRS to collect is offset of a future refund. That avenue will not exist for these taxpayers. I don’t think the IRS will take the somewhat difficult steps to pursue the heirs for this amount of money.”