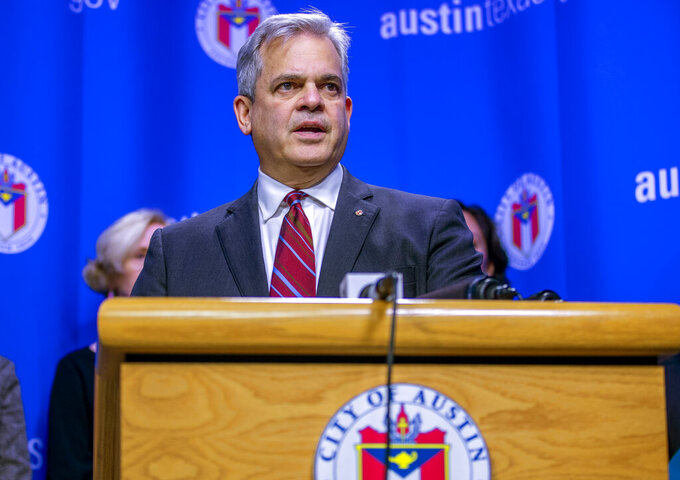 FILE - In this March 6, 2020, file photo, Austin Mayor Steve Adler speaks during a press conference in Austin, Texas. Adler took a vacation to Mexico with family in November at a time when he was urging people to "stay home if you can." The trip revealed by the Austin-American Statesman on Wednesday, Dec. 2, 2020, comes after California Gov. Gavin Newsom, another public official who has also pleaded with his residents to resist the temptation to socialize, acknowledged last month that he attended a birthday party at a posh restaurant with friends. (Ricardo B. Brazziell/Austin American-Statesman via AP, File)

AUSTIN, Texas (AP) — Austin Mayor Steve Adler went on vacation to Mexico with family in November as he urged people to stay home amid worsening coronavirus caseloads in Texas, at one point recording a video during the trip in which he told residents back home that now was “not the time to relax."

The trip revealed Wednesday by the Austin American-Statesman is the latest example of a public official who has pleaded for vigilance in the face of rising cases and hospitalizations across the U.S. seeming to not heed their own guidance.

Hours after the story was published, Adler issued a statement apologizing for the trip.

"While I violated no orders or guidelines, I regret this travel," Adler said. “I wouldn’t travel now, didn’t over Thanksgiving and won’t over Christmas. But my fear is that this travel, even having happened during a safer period, could be used by some as justification for risky behavior. In hindsight, it set a bad example, for which I apologize."

Last month, California Gov. Gavin Newsom came under scrutiny for attending a birthday party at a posh restaurant in the wine country near San Francisco as he urged people to stay within their own households. Denver Mayor Michael Hancock also flew to Mississippi to visit family for Thanksgiving despite sending messages on social media and to city staff asking them to avoid traveling for the holiday.

Texas surpassed 9,000 hospitalized virus patients this week for the first time since a deadly summer outbreak. More than 15,000 new cases were reported Tuesday, smashing a single-day record, though state health officials attributed some of that spike to a backlog of results from the long Thanksgiving holiday weekend.

The trip to Cabo San Lucas came after Adler hosted an outdoor wedding and reception with 20 guests for his daughter at a hotel near downtown, according to the newspaper. Adler said the attendees had to take a rapid COVID-19 test and maintain social distancing. He acknowledged, however, that although masks were distributed at the wedding, all guests were “probably not" wearing them all the time.

Adler typically does a nightly livestream on Facebook, and while in Mexico on Nov. 9, he recorded a video warning about the rising number of cases. He did not say in the video that he was on vacation.

“We need to stay home if you can, “Adler said in the video. "This is not the time to relax. We are going to be looking really closely. ... We may have to close things down if we are not careful.”

After Adler returned from the trip, local health officials elevated the city's COVID-19 guidance ahead of the Thanksgiving holiday to Stage 4, which discourages nonessential travel.