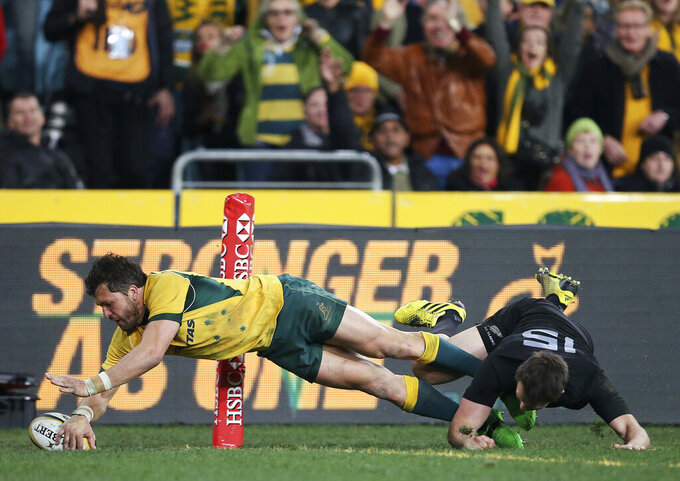 FILE - In this Aug. 8, 2015, file photo, Australia's Adam Ashley-Cooper, left, dives past New Zealand's Ben Smith to score a try during their Rugby Championship match in Sydney. Australia is set to host the Rugby Championship in November and December after a late change of mind by governing body SANZAAR, Friday, Sept. 11, 2020. (AP Photo/Rick Rycroft, File)

The tests will be played in Wellington on Oct. 11 and Auckland on Oct. 18, though the Auckland test likely will be moved to Dunedin if New Zealand’s largest city remains under stricter coronavirus restrictions than the rest of the country.

Auckland currently is under Level 2 lockdown rules, which would require the test at Eden Park to go ahead without fans, while matches elsewhere in New Zealand can take place in full stadiums.

The Wallabies could arrive in New Zealand as early as Friday and will complete mandatory isolation at a four-star hotel in central Christchurch. Players and support staff will be tested for COVID-19 after the third day of their 14-day quarantine period and, if all team members test negative, the team will be able to train at Christchurch’s Linwood Rugby Club, officials said Wednesday.

The Bledisloe Cup series had been in jeopardy when the Wallabies rejected previous quarantine restrictions which would have prevented them training as a full squad until near the end of their isolation period. The Wallabies agreed to go ahead with the matches when relaxed regulations meant they could train in full from the third day.

Australia won the right to host the four-nation Rugby Championship ahead of New Zealand because of its more lenient quarantine requirements.

“I’ve been really impressed with Hoops; we’ve spoken a lot over the past nine months and it’s highlighted his passion and commitment,” Rennie said. “He’s a good man with an outstanding work ethic and he’s a great role model for our young men coming through."

Hooper had been captain for 46 of his 99 tests. Only George Gregan (59) and John Eales (55) have led the Australian side on more occasions.

Also Wednesday, Australian airline Qantas said it was ending its 30-year sponsorship with Rugby Australia. Just days after announcing massive salary cuts for its executives, Qantas said it had reviewed a number of sporting sponsorships as it continues to manage the fallout from the coronavirus pandemic on the aviation industry.

“Regrettably, Qantas is not in a position to continue its 30-year relationship with Rugby Australia beyond the end of this calendar year,” the airline said. The move is expected to save the airline 20 million Australian dollars ($14.25 million) a year.