Australia signs deal for 25M Moderna doses through next year 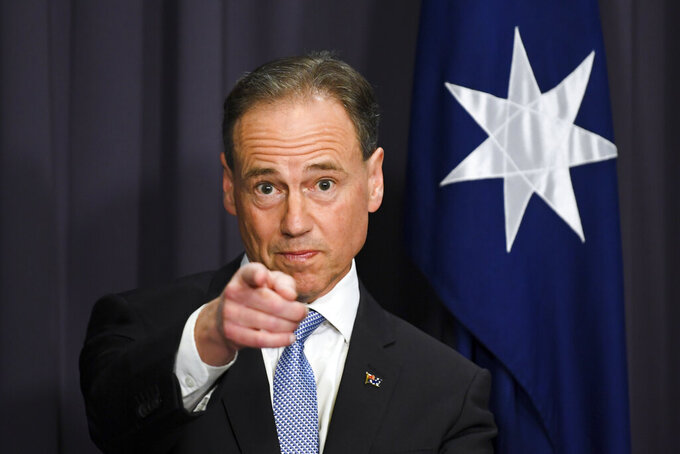 Australia's Health Minister Greg Hunt speaks to the media during a press conference at Parliament House in Canberra, Thursday, May 13, 2021. Australia has reached a supply agreement for 25 million doses of Moderna COVID-19 vaccines. (Lukas Coch/AAP Image via AP)

Australia has reached a supply agreement for 25 million doses of Moderna COVID-19 vaccines in a deal that the government hopes will ensure all Australian adults have access to inoculation this year.

The vaccines have yet to be approved by the Australian regulator, the Therapeutic Goods Administration. Pfizer and AstraZeneca are the only coronavirus vaccines approved for use in Australia. All three vaccines require two doses.

Prime Minister Scott Morrison said he expected the first 10 million Moderna vaccines to arrive in Australia in the last three months of 2021.

The 15 million booster doses would deal with possible future variants of the virus, he said.

“We’re now well into the phase of dealing with what’s coming next because the pandemic’s not going anywhere,” Morrison said.

Moderna is in discussions with the government to allow its vaccines to be manufactured in Australia.

Australian-made Moderna shots could be available as early as next year, said Brendan Murphy, chairman of Australia’s Science and Industry Technical Advisory Group on COVID-19.

AstraZeneca is already manufactured in Australia. But Moderna promises to provide quicker inoculation, with three weeks between shots as opposed to three months with AstraZeneca.

Pfizer’s recommended doses are also three weeks apart. But Moderna has an advantage that it does not need to be stored at temperatures as low as Pfizer.

Moderna vaccines would help Australia achieve its aim of inoculating all willing Australian adults within the population of 26 million by the end of the year.

“This locks in our capacity to ensure that every Australian has access to a vaccine this year,” Health Minister Greg Hunt said.

Australia has contracted 20 million imported Pfizer doses, which is the preferred option for adults under 50 years old because of the blood clotting risks associated with the AstraZeneca shot. The government also has deals for 3.8 million imported AstraZeneca doses plus 50 million locally manufactured shots.

The government expects Moderna vaccines would be recommended for Australians under 50.

Hunt said he expects the first of Australia’s order of 51 million doses of the Novavax vaccine will be delivered this year.

Australia’s CSL plant would manufacture the 50 million AstraZeneca doses as planned. Shots that Australia did not need would be donated to neighboring countries, Hunt said.

“We are continuing on with the production because we think if a country can be producing vaccines, the world needs those vaccines if we have more than we need,” Hunt said.

Australia has been relatively successful in containing the virus. While 910 have died of COVID-19, the government argues the death told would be 30,000 higher if Australia’s fatality rate was the average of Organization for Economic Cooperation and Development countries.