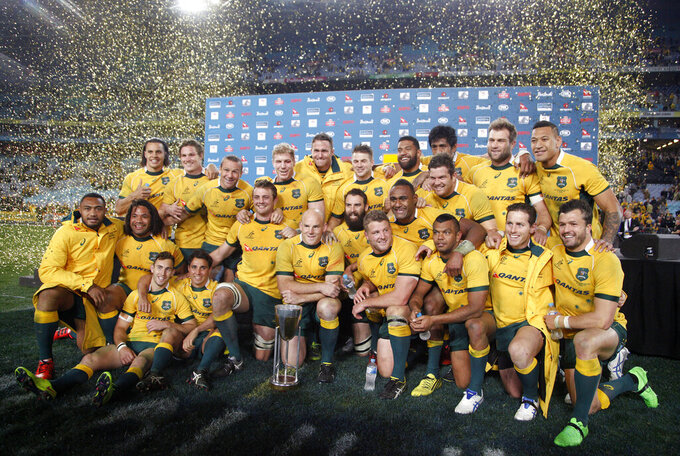 FILE - In this Aug. 8, 2015, file photo, the Australian team poses for a photo with their trophy after defeating New Zealand in their Rugby Championship match in Sydney. Rugby Australia says Tuesday, June 2, 2020, it wants to establish a quarantine hub which will enable it to host the Rugby Championship if the tournament is staged during the carryover effects of the coronavirus pandemic. (AP Photo/Rick Rycroft, File)

BRISBANE, Australia (AP) — Australia’s revamped Super Rugby competition will feature seven experimental rules designed to increase the attacking element of the game and enhance it as a spectacle for viewers.

Super Rugby AU has adopted the red card replacement rule and the so-called Super Time for tied matches that will be in place for the New Zealand’s Super Rugby Aotearoa domestic competition, which kicks off Saturday in Dunedin and is expected to attract an almost capacity crowd.

Rugby has been suspended globally since March because of the coronavirus pandemic. The regular five-nation 15-team Super Rugby tournament was suspended after seven rounds, leaving participating unions to go their own ways to fill the void once lockdowns are lifted.

Australian organizers are embracing ideas from other countries and from the National Rugby League, including goal-line dropouts instead of five-yard scrums when an attacking player is held up in-goal or knocks forward over the tryline.

The red card replacement is new in rugby union. Usually a player red carded by a referee cannot be replaced. Under the experimental rule, a player sent off in such circumstances can be replaced after 20 minutes — which is double the penalty for a regular yellow card infringement. If all substitutions have been used, the red-carded player cannot return to the game.

In other variations, matches that are tied after regulation can be decided on golden-point extra time — the first team to score in the two five-minute periods of extra time — there'll be limits on scrum re-sets, more focus on infringements at breakdowns and rewards for attacking, touch-finding kicks in general play.

Australia's director of rugby Scott Johnson said the experimental rules were designed to make the game more entertaining and agreed by a group of 24 comprising coaches, players, referees and administrators.

“Throughout the process we stuck to the principle that whatever we changed, nothing could compromise the Wallabies’ preparation for test rugby,” Johnson said. "I believe the changes we have implemented will broaden and enhance the capabilities of our players.”

Wallabies prop Scott Sio said the forwards may need to improve their fitness to adjust to the added speed of the game.

Rugby Australia is pushing for a return to international rugby for the Wallabies later this year, aiming for a four-test Bledisloe Cup series against New Zealand and a condensed Rugby Championship also involving World Cup champion South Africa and Argentina.