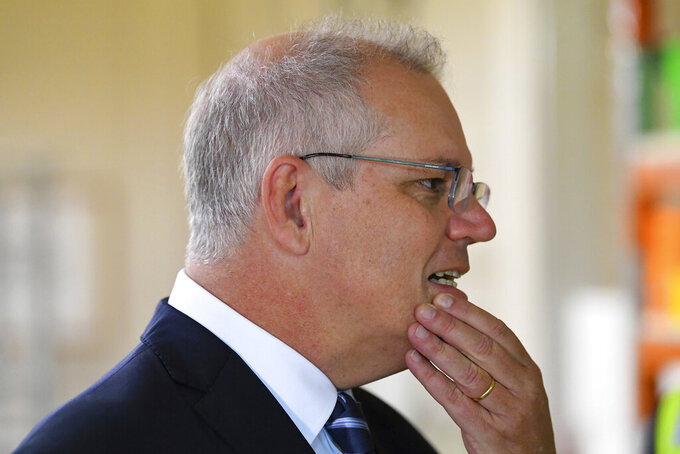 CANBERRA, Australia (AP) — Australia’s ambassador to Beijing has reportedly described China as a “vindictive” and “unreliable” trading partner as Australian officials revealed steep declines in most exports to the nation’s most important market.

Ambassador Graham Fletcher told a China-Australia business group in an online briefing from Beijing on Thursday he did not know if China was aware of the damage its trade practices were causing in Australia and internationally.

“It’s been exposed as quite unreliable as a trading partner and even vindictive,” The Australian newspaper and Australian Broadcasting Corp. on Friday quoted Fletcher as saying.

Australia’s Department of Foreign Affairs and Trade did not immediately comment on the accuracy of the media reports.

A diplomatic rift between the free trade partners has worsened since Australia called for an independent inquiry into the coronavirus pandemic a year ago.

Australian exports of coal, wine, barley, cotton, lobsters and wood have either been blocked or severely disrupted, usually for unclear reasons.

China is unlikely to disrupt trade in iron ore, Australia’s most lucrative export, while production in Australia’s main rival, Brazil, is compromised by the pandemic.

Due to booming iron ore prices, Australian exports to China fell by only 2% in value in the last six months of 2020, compared to the same period a year earlier, foreign department officials told a Senate committee late Thursday.

But with iron ore stripped out, Australian exports to China would have fallen by about 40%, department official Elly Lawson said.

“We have seen quite significant drops in some commodities,” Lawson said.

The officials did not place a dollar value on the exports.

The pandemic had a negative impact on Australian exports, but exports had only declined by 22% to the rest of the world outside China, department economist Jennifer Gordon said.

Australian coal exports to India and Japan had “increased quite substantially,” limiting the fall in overall exports of coal — Australia's second-most valuable commodity — to 8%, Gordon said.

Trade Minister Dan Tehan wrote to his China’s new Commerce Minister Wang Wentao in January in a bid to establish lines of communication. But Wang had not responded, Lawson said.

“We want to have a positive trading relationship with China and we’re obviously facing some difficult issues in that relationship and really appreciate the great support we’ve had from liberal democracies all around the world. None less so than the United States,” Morrison told reporters.