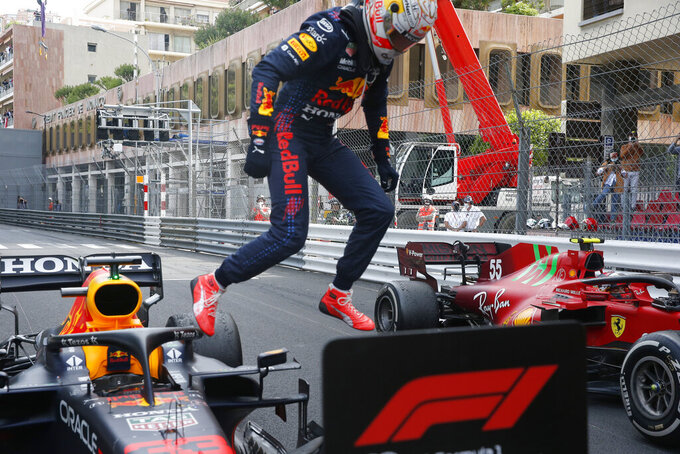 Red Bull driver Max Verstappen of the Netherlands jumps out of his car after winning the Monaco Grand Prix at the Monaco racetrack, in Monaco, Sunday, May 23, 2021. (Sebastien Nogier, Pool via AP)

Last year: Did not race (pandemic). Martin Truex Jr. won from the eighth starting position in 2019.

Fast facts: Larson's victory was the 269th for Hendrick Motorsports, moving the organization past Petty Enterprises for the most in Cup Series history. ... Winless Denny Hamlin continues to lead the point standings by 76 over Larson, who became the fourth multiple race winner through 15 events. Truex (3 wins, 6th in points) and Alex Bowman (2 wins, 12th in points) are the others.

Last year: Did not race (pandemic).

Fast facts: Defending series champion Austin Cindric has won three of 12 races and leads non-winner Harrison Burton by 84 points in the standings. ... A.J. Allmendinger and Daniel Hemric are both 108 points back. ... Two-time winner Justin Allgaier is fifth, 133 points back. ... The only driver outside the top five to have led as many as 100 laps is 16th-place Josh Berry, who has led 151 while driving in 10 of the 12 races run so far.

Last race: John Hunter Nemechek won for the third time in 10 races and increased his points lead to 44 over two-time winner Ben Rhodes.

Last year: Did not race (pandemic).

Fast facts: Verstappen's second victory of the season left him with a four-point lead over seven-time series champion Lewis Hamilton in the driver standings through five events. ... Hamilton has won three times and Verstappen twice this season. ... Lando Norris of McLaren Mercedes is a distant third in points. ... Verstappen has finished on the podium in all five races. Hamilton has four podium finishes.