Bach arrives in Tokyo on July 8; infections on rise again 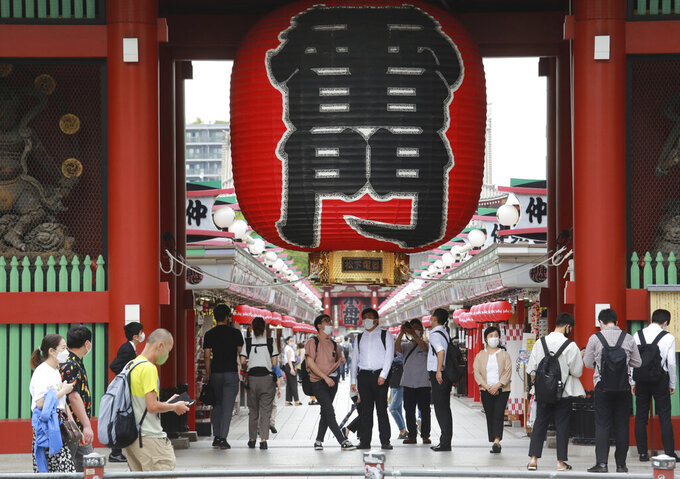 People wearing face masks to help protect against the spread of the coronavirus walk along the Asakusa area in Tokyo, Wednesday, June 30, 2021. (AP Photo/Koji Sasahara)

TOKYO (AP) — IOC President Thomas Bach will arrive in Tokyo on July 8 and spend three days in isolation before holding meetings leading up to the opening of the postponed Tokyo Olympics on July 23, Tokyo organizers and the the International Olympic Committee said Wednesday.

Bach is also expected to visit Hiroshima on July 16, at the same time as his vice president and colleague John Coates is to visit Nagasaki.

Visiting dignitaries often pay visits to the cities as a reminder of the nuclear attacks by the United States in August 1945 during World War II.

Ahead of Bach's visit, COVID-19 cases are rising in Tokyo.

On Wednesday, Tokyo reported 714 new cases — the highest in five weeks and the 11th straight day in Tokyo that cases are higher than they were seven days previously.

Only about 12% of Japanese are fully vaccinated. A quasi-state of emergency ends on July 12 with the possibility that government officials may have to reinstate another state of emergency that could be in force when the Olympics open.

In controversial remarks made just over a month ago, Coates was asked if the Olympics could be held during a state of emergency.

“The answer is absolutely yes,” he replied.

The IOC has pushed on with the Olympics despite strong local opposition, partially because it earns almost 75% of its income from selling television rights. That income has stalled during the pandemic.

Officially, Japan is spending $15.4 billion on the Olympics, although government audits suggest it's much more. All but $6.7 billion is public money.

Tokyo Metropolitan Government officials have already decided to take the Olympic torch relay off streets in Tokyo from July 9 through July 16. It is unclear what form the relay will take from July 17 until the opening ceremony on July 23 at the National Stadium.

The relay began in March in northeastern Japan. It has faced numerous detours, scaled-back programs, and has been run at times only in public park spaces to avoid spreading the virus.

Organizers and the government are under pressure to improve screening after a Ugandan team member tested positive earlier this month at Tokyo’s Narita airport and was quarantined there.

But the rest of the nine-person team was allowed to travel more than 500 kilometers (310 miles) on a chartered bus to their pre-Olympics camp in the western prefecture of Osaka.

Three days later, a second Ugandan also tested positive, forcing seven town officials and drivers who had close contact with the team to self-isolate. The team members were quarantined at a local hotel.

Concerns escalated after it was announced that both Ugandans had the delta variant of the virus, which is believed to spread more easily.