Back on the bump: New dad Cole sets sights on Yankees title 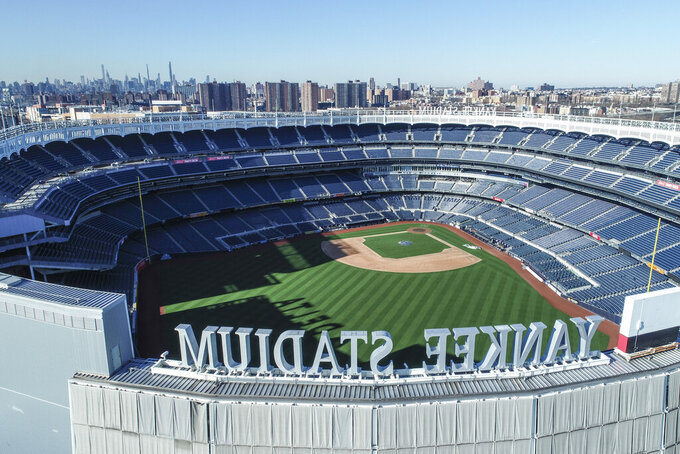 This March 26, 2020 file photo shows an empty Yankee Stadium on opening day due to COVID-19 coronavirus restrictions in the Bronx borough of New York. The Yankees and Mets would train in New York if Major League Baseball and its players try to start the coronavirus-delayed season. New York Gov. Andrew Cuomo made the announcement Saturday, June 20, 2020, and the teams confirmed the decisions. (John Woike/Samara Media via AP)

“There is only going to be only one coronavirus World Series champion, and so that's unique in and of itself,” he said Friday. “I don’t see why you wouldn’t want to take that trophy home, especially when you're competing against your peers and there's only going to be one of them.”

It already has been a big week for Cole. His wife, Amy, a sister of San Francisco shortstop Brandon Crawford, gave birth Tuesday to their first child. Caden Gerrit Cole weighed in at 7 pounds, 13 ounces.

“He’s a good mix of his dad and his mom,” Cole said. “He's absolutely adorable. He’s got big blue eyes and gosh, I just can’t stop staring at him.”

Signed to a $324 million, nine-year contract that set a record as the highest for a pitcher, Cole said the delay caused by the pandemic might benefit the Yankees because it allowed many to heal.

Left-hander James Paxton has recovered from back surgery in February, designated hitter Giancarlo Stanton has bounced back from a strained right calf sustained during defensive drills on Feb. 26 and right fielder Aaron Judge appears healthy following a stress fracture to his first right rib.

Switching-hitting center fielder Aaron Hicks, a key for the heavily right-handed Yankees, had been slated to miss the first half of the season following Tommy John surgery on his right elbow on Oct. 31.

“He'll be the first player ever to have Tommy John and not miss a regular-season game,” Cole said.

Cole figures to have 12 or 13 starts to tune up for the time that matters to the Yankees, the playoffs. A star for the Houston Astros last year, he was signed to lead the team to its first World Series title since 2009.

“But, yeah, we’re bullish on it. Sixty games, 162 games, when it comes down to it players just want to compete and get after it,” he said. "It's going to be a different season. We’re used to playing really about three times the amount of games.”

With the season approaching, reliever Zack Britton is eager to concentrate on baseball rather than bargaining.

Britton is a union representative and was sad to see the labor talks between owners and players become so public.

“We wanted to keep that behind closed doors as much as possible, but now that we’re back playing, that’s really my focus right now is playing,” he said.

“All this stuff that was in between with the negotiations, it was a difficult time, I think, for the game. I think the best thing for us moving forward as players and the game in general and the owners, is just getting back to playing baseball" he said.