Back to the pool: USA Swimming unveils tentative schedule 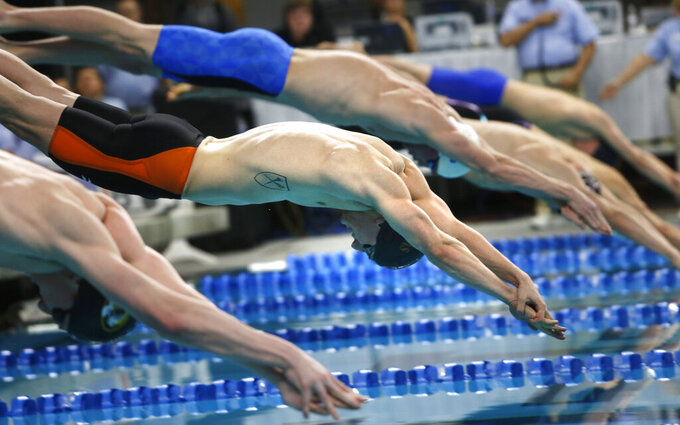 FILE - In this Jan. 17, 2016, file photo, Andrew Wilson, center, competes in the men's 100-meter breaststroke during the Arena Pro Swim Series in Austin, Texas. USA Swimming has announced its plans for a return to competition, beginning with a series of regional events in August before the national schedule begins in early November at Richmond, Virginia. (AP Photo/Stephen Spillman, File)

USA Swimming is planning a return to the pool.

Though, no one is quite sure how it will all play out during the coronavirus pandemic.

The national governing body unveiled a tentative schedule Monday that begins with a series of regional events in August before a national lineup of meets kicks off in early November — all leading up to next summer’s Olympic trials in Omaha, Nebraska and the Tokyo Games.

Tentative is the key word, for sure.

“I think everything is taken with a grain of salt and maybe even more than one grain of salt,” said Mike Unger, USA Swimming’s chief operating officer. “We’re trying to bring normalcy back when it’s not normal, and we know that. But we have to have a Plan A, a Plan B and even a Plan C.”

Olympic champion Ryan Murphy, who won three gold medals at the Rio Games, welcomed news of a revamped schedule but said he’s not ready to celebrate just yet.

“I view it as a good sign,” Murphy told The Associated Press in a telephone interview from his training base at Cal-Berkeley. “By the same token, I’ll be ready to adjust. Until we get out of this thing, I’m going to stay in a flexible mindset."

USA Swimming canceled all national events in July and early August, most notably the Speedo Summer Championships. The regional events would be held in mid to late August, with an eye toward limiting the need for travel and promoting a safer environment for athletes, coaches, officials and families.

Unger said the organization is talking with pools all over the country to assess potential availability, but also recognizes that any plans would be subject to health guidelines and the approval of local officials. USA Swimming is considering anywhere from 12 to 16 meets, divided equally between four geographic regions that are already set up for lower-level meets.

“We’re not trying to rush into anything, but we’ve got to be methodical,” Unger said. “With these regional meets, we would not be forcing someone from, say, Boston to go to Atlanta for a meet. Hypothetically, they could go to Long Island instead.”

The U.S. Olympic trials in Omaha have already been rescheduled for June 13-20, about a month ahead of the new 2021 dates for the Tokyo Summer Games.

There are some changes from this season’s Pro Swim Series, with Richmond replacing Greensboro, North Carolina as the leadoff event in November and San Antonio taking Des Moines’ spot on the schedule in March.

Des Moines was the last TYR meet this year before the pandemic largely shut down live sporting events around the world and forced a one-year postponement of the Olympics.

Even if swim meets are able to resume, they may look different than they have in the past. USA Swimming will consider everything from competing without fans to maintaining social distancing on pool decks that are usually jammed with athletes, coaches and officials.

“From an optics standpoint, we need to be smart and wise about how we gather when we are able to gather," Unger told the AP.

After getting an unexpected break when the Olympics were officially postponed last month, most swimmers have returned to some form of training.

Murphy said he’s been able to get in occasional pool training at private facilities in the Bay Area, but the main training pool at Cal-Berkeley remains closed. The bulk of his training is on dry land, mostly in the garage of the house he shares with five roommates since gyms have yet to reopen in California.

“No one is really leaving the house, so we’re all just working out together,” Murphy said. “We pull the cars out of the garage and work out there. We have a boxing bag, some ropes. I got a stationary bike. We’ve got a 30-pound dumbbell and a 50-pound kettlebell. We’re making it work. We don’t need all the fancy bells and whistles to stay in shape.”

And now, at least, he has a series of meets to look forward to — assuming they actually take place.

“I’ll be there for sure if they do,” Murphy said. “But I’m also going to be ready if potentially everything gets pushed back again.”