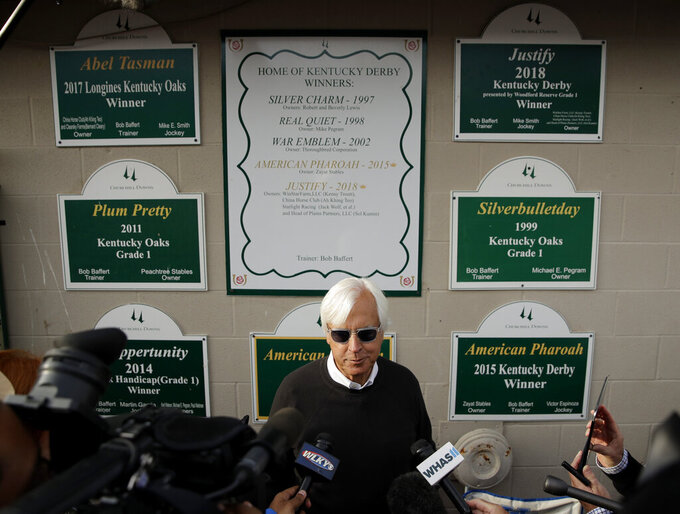 FILE - In this May 2, 2019, file photo, trainer Bob Baffert talks to the media outside his stable before a workout for the Kentucky Derby at Churchill Downs in Louisville, Ky. Two-time Triple Crown-winning trainer Bob Baffert, who has had multiple horses test positive in post-race drug testing, is taking steps to “do better,” including hiring outside oversight. Baffert said in a statement Wednesday, Nov. 4, 2020, that he is “very aware” of the incidents involving his horses and the impact that it's had on his family, the sport and himself.. (AP Photo/Charlie Riedel, File)

Two-time Triple Crown-winning trainer Bob Baffert, who has had multiple horses test positive for medication violations, is taking steps to “do better,” including hiring outside oversight.

Baffert said in a statement Wednesday that he is “very aware” of the incidents involving his horses and the impact that it’s had on his family, the sport and himself.

“Given what has transpired this year, I intend to do everything possible to ensure I receive no further medication complaints,” he said.

Baffert said he has hired veterinarian Dr. Michael Hore of the Hagyard Equine Medical Institute in Lexington, Kentucky, to add an extra layer of protection to ensure the well-being of his horses and rule compliance. Hore’s primary focus is digital radiography, sales work, angular limb deformities and lameness, according to the clinic’s website.

Hore is licensed in four states and Europe, according to the website, but not in California, where Baffert's stable is based.

Baffert plans to increase training and awareness of his employees involving proper protocols. He is also increasing his oversight and commitment to “running a tight ship” and being careful that protective measures are in place.

“We can always do better and that is my goal,” he said. “I want to raise the bar and set the standard for equine safety and rule compliance going forward.”

Baffert’s announcement comes as he is set to saddle six horses in this weekend’s Breeders’ Cup world championships in Kentucky, including three in the $6 million Classic. He is the all-time leader among trainers in money won at the event, with over $30 million. His 15 Cup victories are tied for second-most.

He has been the most recognizable figure in U.S. racing for years. He guided American Pharoah to the first Triple Crown sweep in 37 years in 2015, and did so again with Justify in 2018.

In May, Gamine and Charlatan both tested positive for lidocaine, a regulated medication, after winning races in Arkansas. Baffert is appealing his 15-day suspension, claiming that the positive tests were due to a patch worn by an employee to treat back pain.

In September, Gamine tested positive for betamethasone, a regulated corticosteroid, after a third-place finish in the Kentucky Oaks. Baffert’s attorney argued that the medication was administered 18 days before the race, outside the recommended withdrawal time of 14 days. Results from a split-sample test have yet to come back.

Last week, Baffert had a horse test positive for dextrorphan, a prohibited substance found in cough medications. His attorney said contamination was involved, through an employee who was taking cough suppressants after recovering from COVID-19.

At the same time, two cases from 2018 involving Justify and Hoppertunity have been re-opened by the California Horse Racing Board. Both horses tested positive for scopolamine, a substance found in jimsonweed, after winning stakes races at Santa Anita. Baffert's attorney contended both cases were the result of environmental contamination.

The CHRB initially took no action on the positives, but it later filed formal complaints in the cases. Stewards heard the cases last week and it's unclear when they will rule.

Baffert is aware of the negative impression the multiple positive cases have created.

“I humbly vow to do everything within my power to do better," he said. "I want my legacy to be one of making every effort to do right by the horse and the sport.”