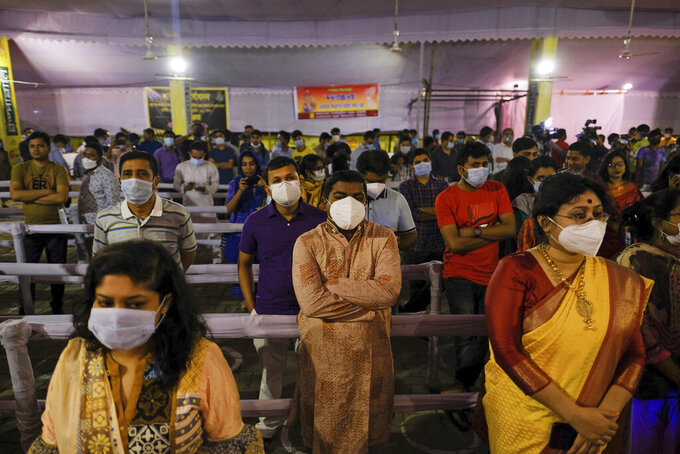 FILE- In this Oct. 22, 2020 file photo, people wearing masks as a precautionary measure against the coronavirus assemble to offer prayers at Dhakeshwari Temple during Durga Puja festival in Dhaka, Bangladesh. Bangladesh is enforcing a lockdown for a week from Monday, shutting shopping malls and transportation, to help curb the spread of coronavirus as the rate of infections and deaths have increased in recent weeks. (AP Photo/Mahmud Hossain Opu,File )

DHAKA, Bangladesh (AP) — Bangladesh is enforcing a lockdown for a week from Monday, shutting shopping malls and transportation, to help curb the spread of coronavirus as the rate of infections and deaths have increased in recent weeks.

Health authorities said they were facing overwhelming pressure for intensive care units in hospitals in recent weeks because of the severe cases of infections.

Domestic flights, river transport and railway operations were suspended Monday while only emergency services will remain operational. Banks will operate for only two and a half hours daily. Industries are allowed to operate but must help their workers commute.

The government has asked people not to go out from 6 p.m. to 6 a.m.

But owners and workers of shopping malls in Dhaka’s Elephant Road area took to the streets, demanding that authorities allow them to run their shops.

Some three-wheelers and cars were seen running on the streets of the capital, Dhaka, which are usually clogged during any busy day. Traffic police intercepted bikers and checked their documents.

Local TV stations reported that the lockdown in many towns were being enforced loosely.

The nationwide lockdown is the second for the South Asian nation after it shut down for two months from late March last year.

On the eve of the lockdown, Prime Minister Sheikh Hasina urged people to help curb the spread of the virus in a speech in Parliament.

“I know everyone will face difficulties. Despite this, I say lives should be given preference over everything,” Hasina said.