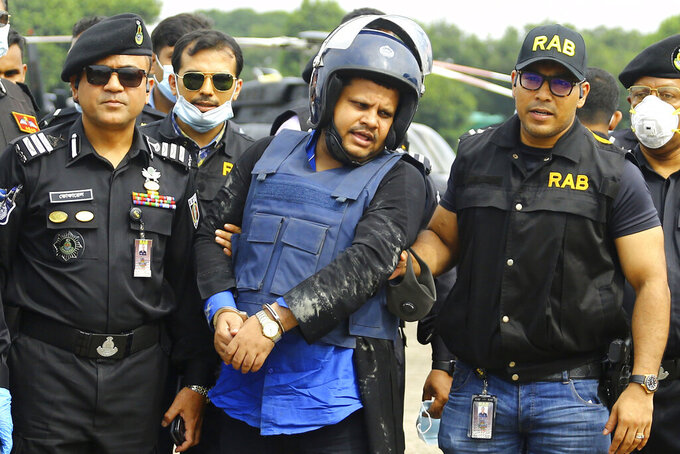 Mohammed Shahed, center, the owner of two hospitals that issued thousands of fake coronavirus test reports is brought by helicopter after being arrested by Bangladesh's Rapid Action Battalion personnel in Dhaka, Bangladesh, Wednesday July 15, 2020. Shahed, a member of the governing party who regularly appeared on TV talk shows, was arrested Wednesday near the Indian border as he attempted to flee the country to India. (AP Photo/Sourav Lasker)

DHAKA, Bangladesh (AP) — Security officials in Bangladesh have arrested the owner of two hospitals that issued thousands of fake coronavirus test reports as he attempted to flee the country to India, officials said Thursday.

Mohammed Shahed, a member of the governing party who regularly appeared on TV talk shows, was arrested Wednesday by the Rapid Action Battalion near the Indian border after a nine-day manhunt.

Shahed is chairman of the Regent Group and owner of two Regent hospitals in the capital, Dhaka.

Abdul Baten, a commissioner of the Detective Branch in Dhaka, said Shahed admitted after his arrest that his hospitals did not have proper equipment to conduct coronavirus tests.

A court in Dhaka on Thursday allowed investigators to keep Shahed in custody for 10 days for questioning.

Officials said the hospitals had issued more than 10,000 coronavirus test results and about 60% were fake even though patients were charged for them. The hospitals allegedly arranged for the remaining tests to be conducted by another hospital.

The two hospitals had not renewed their medical licenses for years, but the Ministry of Health nevertheless signed a deal with Shahed to dedicate the hospitals to coronavirus testing and treatment as the number of cases rose in Bangladesh.

Bangladesh on Thursday was nearing 200,000 confirmed coronavirus cases, including 2,496 deaths. Public health experts say the actual number is much higher because only about 70 testing facilities are available in the country of 160 million people.

Shahed belongs to the governing Awami League party headed by Prime Minister Sheikh Hasina and is a member of its foreign affairs subcommittee. He has more than 50 illegal cases pending against him across the country on various charges including forgery and cheating.

Another doctor and her husband were also arrested recently on similar charges of falsifying test results.

Bangladesh earns about $19 billion a year from about 10 million overseas workers. Authorities said about 15,000 Bangladeshi workers with jobs in Italy remain stranded in Bangladesh and it is unclear whether they will be able to travel to the European country.

Bangladesh has reopened businesses including its main export-earning garment sector after a monthslong closure.