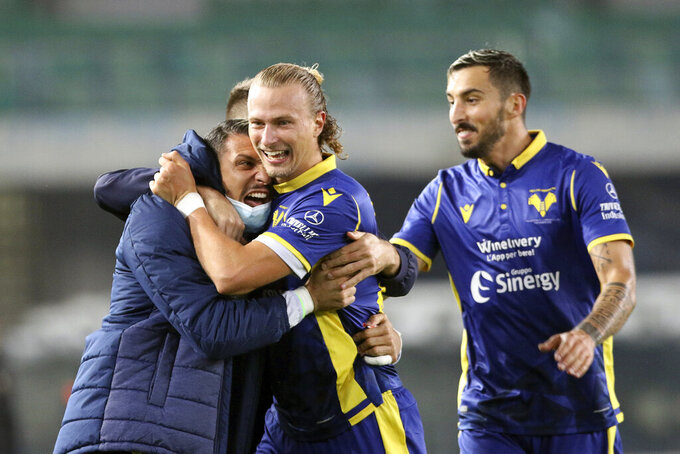 Verona's Antonin Barak, center, celebrates after scoring during the Serie A soccer match between Hellas Verona and Benevento, at the Bentegodi Stadium in Verona, northern Italy, Monday, Nov. 2, 2020. (Paola Garbuio/LaPresse via AP)

VERONA, Italy (AP) — Antonín Barák showed no ill effects from the coronavirus as he scored twice to help Hellas Verona beat Benevento 3-1 in Serie A on Monday.

Verona moved to seventh, level on points with a number of other teams and five points behind early leader AC Milan.

Benevento, which was promoted from Serie B, was 14th.

It was a matchup of two coaches who exceeded expectations last season. Filippo Inzaghi’s Benevento topped Serie B by a large margin and won two of its opening five matches in Serie A.

Ivan Jurić reportedly turned down other offers and stayed at Hellas Verona after guiding his team to a top-half finish last season, and again has his squad organized as evidenced by a 1-1 draw with Juventus last weekend.

Barák was making his first start in the league since recovering from the virus and he fired Verona in front in the 17th minute.

Benevento had a number of chances to level and Gianluca Lapadula finally did so early in the second half.

But Barák restored his side’s lead seven minutes later and Darko Lazović headed in Federico Dimarco's cross in the 77th to seal the result.