Barca may need youth to get past Napoli, reach CL final 8 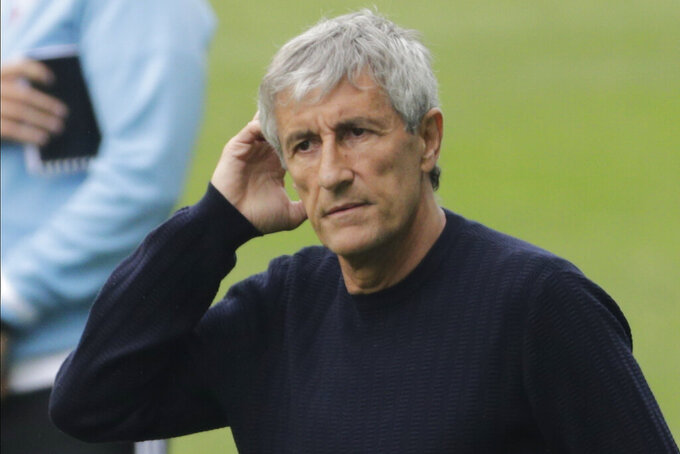 BARCELONA, Spain (AP) — Barcelona coach Quique Setién says he is ready to count on youngsters Ansu Fati and Riqui Puig to eliminate Napoli and advance to the Champions League final eight in Portugal.

Barcelona will be without midfielders Sergio Busquets, Arturo Vidal and Arthur for Saturday’s second leg of their round-of-16 tie. The match comes five months after the Spanish side drew at Napoli 1-1 before the pandemic brought sports to a halt.

“Both Rique and Ansu are ready to play,” Setién said Friday. “They have performed and played pretty well and could perfectly well start (against Napoli). And if they do start, I am sure they will be guaranteed to play well.”

The 20-year-old Puig has a good chance to earn his debut in Europe’s top-tier club competition as Busquets and Vidal are suspended for the critical match. Arthur has had a falling out with the club after securing his transfer to Juventus for next season and refuses to return to team practice.

Setién values Puig’s passing and ball-control skills, which remind some Barcelona fans of Xavi Hernández and Andrés Iniesta, and rewarded him with a bigger role during the final part of the Spanish league.

Fati, 17, made a huge splash this season by becoming the youngest player to score in the Spanish league and the Champions League, among other precocious scoring milestones.

With Lionel Messi and Luis Suárez set to start in attack, Fati could get picked over fellow forward Antoine Griezmann, who was cleared to play by team doctors on Friday after having recovered from a right thigh injury last month.

Clement Lenglet was also cleared by team doctors and will likely play with Gerard Pique in the center of the defense with Samuel Umtiti still injured.

“It would have been better to have all our players available, but that is not the case,” Setién said. “We are going to have to rely on many players from our youth team. We have to adapt and we will do our best not to miss the players who can’t be with us.”

The match at Camp Nou will be played without spectators. Barcelona and large areas of northeast Spain are seeing a recent spike in cases of COVID-19, but health officials have assured UEFA the game is safe to play despite the concerns of Napoli.

Setién said he was confident that keeping his job does not hinge on qualifying for the ¨bubble¨ Champions League tournament in Lisbon this month. Setién has been under intense pressure since Barcelona lost the Spanish league to Real Madrid last month, when Messi called his team ¨weak¨ and said that unless the team turned things around it would lose to Napoli.

“In no moment have I thought that tomorrow’s game could be my last,” Setién said. “We are focused on advancing and playing the rest of the competition in Portugal with the same sense of excitement that we feel now.”

“He has trained with the team. He’ll play tomorrow if he’s fully fit,” the manager said.

“We have to climb Everest tomorrow. Barcelona have fantastic young players who are a joy to watch,” Gattuso said. “We need a massive performance if we want to come away with a good result.”