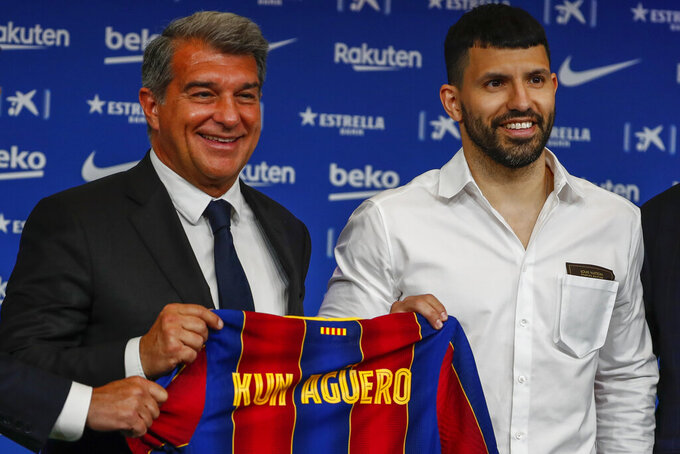 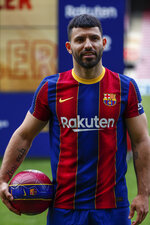 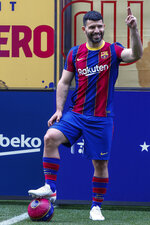 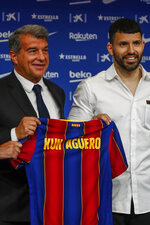 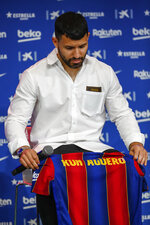 MADRID (AP) — After a decade of success in the Premier League, Sergio Agüero is returning to Spain to try to help Barcelona get back on track.

The Catalan club announced on Monday that it reached an agreement to sign Agüero on a two-year deal. The Argentina striker will officially join Barcelona on a free transfer on July 1, after his contract with Manchester City expires.

“We all know that Barça is the best team in the world, so it's a good decision to be here,” Agüero said. “Hopefully I'll be able to help the team. I'm very happy.”

The 32-year-old Agüero underwent a medical in the morning and was later introduced by Barcelona at the Camp Nou Stadium, where he posed for photos wearing an unnumbered jersey with “Kun Agüero” on the back.

Barcelona's only title this season came in the Copa del Rey, and finished trophyless in the previous one, when the club was marred by political turmoil and financial difficulties.

Barcelona missed an experienced true striker like Agüero after it let go Luis Suárez, who eventually helped lead Atlético Madrid to the Spanish league title. Lionel Messi still thrived as usual for Barcelona, finishing as the Spanish league's top scorer with 30 goals, but he got little help from teammates such as Antoine Griezmann, Ousmane Dembélé, Martin Braithwaite, Ansu Fati and Francisco Trincão.

Griezmann was the second highest scorer for Barcelona in the league, with 13 goals. Dembélé was next with six. Suárez, who missed time because of injuries and the coronavirus, scored 21 goals for Atlético, including the title-clincher in the last round.

“When I arrived in Europe as an 18-year-old with Atlético Madrid, it was a learning experience, the club helped me a lot,” Agüero said. “I've changed the way I play since then. I'm a more established player now.”

He spent 10 seasons in England, becoming City’s record scorer with 260 goals and one of its greatest-ever players. In was at the end of his first season with City that he scored the dramatic stoppage-time winner against Queens Park Rangers in the final game of the season to clinch the title for the club.

He was plagued by fitness issues throughout his final season with City and had to undergo knee surgery last year. He came off the bench in Saturday's Champions League final, which Man City lost 1-0 to Chelsea.

Agüero moved to Atlético from Argentine club Independiente. He was with Argentina's under-20 World Cup winning squads in 2005 and 2007, as well as in the national team that won an Olympic gold medal in Beijing in 2008, alongside Messi.

It still remains unclear whether Messi will stay with Barcelona after having his request to leave denied last season. His contract ends now but he has yet to announce his decision. Agüero said he speaks every day with Messi but wouldn't make any revelations about his friend's future, saying the last message he received from the playmaker was to congratulate him on his signing.

“I hope we can play together (at Barcelona),” Agüero said. “It would make me very proud to play together with him. We've been playing together in the national team. I know him very well.”

It’s also unknown if coach Ronald Koeman will return to finish his contract.

“We started a period of reflection, we are evaluating,” Barcelona president Joan Laporta said. “We are in contact with him. He's our coach, he has a contract and we want to respect that, but we also have to reflect on what has gone well and what has not gone well last season.”

Other possible signings being talked about for Barcelona include Eric García, Agüero's teammate at Man City, as well as Memphis Depay of Lyon and Georginio Wijnaldum of Liverpool.

“We want Leo to stay, of course,” Laporta said, "and Agüero's signing will be one of the several signings that you will be seeing in the month of June."