Bartos declares candidacy for US Senate in Pennsylvania 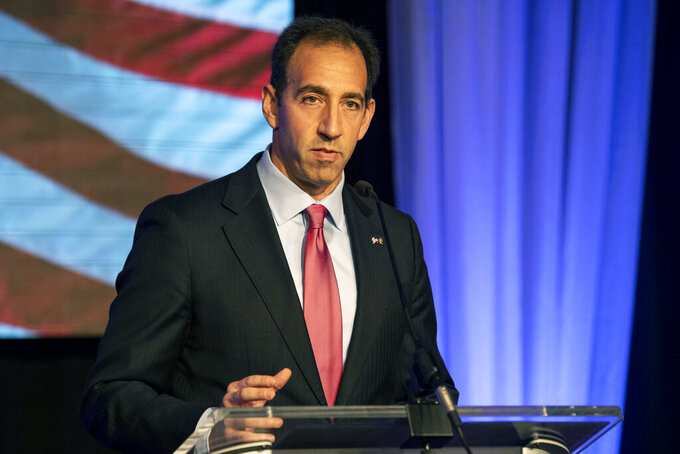 Bartos, the Republican Party's unsuccessful nominee for lieutenant governor in 2018, has said he was seriously considering a run and filed paperwork to run last month.

On Monday, the suburban Philadelphia real estate investor and longtime GOP fundraiser updated his campaign website to say that he is running.

He declared his candidacy on Twitter, using an expletive to say he’d get things done, perhaps a throwback to a slogan in paraphernalia used to promote former President Donald Trump's 2020 reelection bid.

“It’s time to make sure that the average Pennsylvanian has a fighting chance to live their own American Dream,” he wrote.

The Montgomery County resident is playing up his roots in Berks County and his work over the past year as a co-founder of the Pennsylvania 30 Day Fund, a nonprofit that raised more than $3 million to distribute as forgivable loans to small businesses in Pennsylvania struggling through the pandemic.

Bartos, 48, has longtime connections to GOP campaign donors and political elite through his work fundraising for candidates. He also served briefly as the state party’s finance chair and has the personal wealth to write his campaign a big check.

The Senate seat in the presidential battleground is being left open after two-term Republican U.S. Sen. Pat Toomey announced in October that he would not run again.

Former Trump administration figures are considering running, although Trump has not yet weighed in to endorse a would-be candidate in the Republican field.

The race for the Democratic nomination is already crowded.

Already declared are Lt. Gov. John Fetterman and state Rep. Malcolm Kenyatta of Philadelphia, while several others say they are considering or will consider a run. They include state Sen. Sharif Street, who is also the vice chair of the state Democratic Party, and U.S. Reps. Brendan Boyle, Chrissy Houlahan and Conor Lamb.

More than a half-dozen of unknown or first-time candidates from both parties have also filed paperwork to run. Pennsylvania has not elected two Democrats to the Senate since the 1940s, although it did have two Democratic senators for nearly two years after Arlen Specter switched parties in 2009.

Bartos enters the race at time when the Republican Party is divided over Trump and the state party fought almost to a tie over whether to formally censure Toomey for voting to convict Trump in the former president's second impeachment trial last month.

Bartos, who comes from a county that voted decisively against Trump, has said that he voted twice for Trump and supports what he accomplished in office. On Monday, he invoked Trump as a fighter for the forgotten.

“During the Trump Administration, millions of Pennsylvanians who had felt abandoned and forgotten had someone fighting for them in Washington and delivering real results for their communities," Bartos wrote in a statement announcing his candidacy.

Bartos does not suggest that the election was stolen from Trump — Trump maintains baselessly that it was — and has said he believes Trump should have ended his efforts to overturn the outcome several weeks after the election when federal courts were rejecting his legal challenges.

But Bartos does not assign blame to Trump for the Jan. 6 attack on the U.S. Capitol, unlike Toomey, U.S. Rep. Brian Fitzpatrick of suburban Philadelphia and Senate GOP leader Mitch McConnell.

Bartos is also joining a Republican movement to tighten voting laws in the wake of Trump's loss in November to Democrat Joe Biden.

Bartos said on Twitter last week that he supports voter ID laws and ending “no excuse” absentee ballots, a law that Pennsylvania passed in 2019 with near-universal support from Republican lawmakers before Trump began attacking mail-in voting, baselessly, as being rife with fraud.