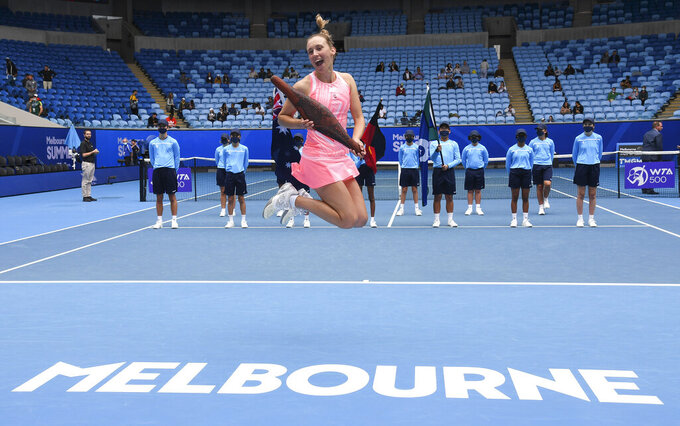 Belgium's Elise Mertens leaps as she holds her trophy after defeating Estonia's Kaia Kanepi in the final of the Gippsland Trophy in Melbourne, Australia, Sunday, Feb. 7, 2021.(AP Photo/Andy Brownbill) 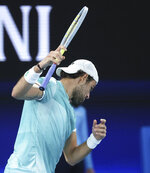 Top-ranked Barty cashed in on her first championship point against Garbine Muguruza in the Yarra Valley Classic and Daniil Medvedev clinched the ATP Cup title for Russia within seconds of each other Sunday as the tuneup tournaments for the Australian Open were culminating the eve of the year’s first major.

After a hectic preparation, which included 14-day quarantines under strict COVID-19 pandemic regulations for the 1,200 or so players, coaches and staff who flew in for the Australian Open, the warmup week of tournaments was being capped with five finals and two semifinals.

Barty kicked it off by claiming her second WTA on home soil — just over a year after her first — with a 7-6 (3), 6-4 win over sixth-seeded Muguruza, the Australian Open runner-up last year.

Barty hasn't left Australia since the coronavirus outbreak became a global pandemic. Instead of playing the U.S. Open or trying to defend her French Open title, she spent her time practicing, playing golf and doing things like watching her favorite football team win the Australian Football League.

“Absolutely no regrets for me,” Barty said. "I felt like it’s been a challenging 12 months for everyone all across the world. Everyone has been in a very different, unique situation, depending on what country they’re in — even what state here in Australia.

“I feel very fortunate to have had the year that I have had — there was nothing but positive vibes. Now I’m really happy to be back playing tennis with an opportunity to play in front of a crowd here at the Australian Open. It’s really special.”

There were small clusters of spectators at Margaret Court Arena to watch Barty's final. Still, that's more of a crowd than most players have been accustomed to seeing at their matches during the pandemic. On Monday, when the Australian Open starts, there's expected to be up to 30,000 fans at Melbourne Park.

To the crowd on Sunday, Barty said: “For us, this is what makes the magic happen."

“I'm so grateful you can be here making it extra special for us," she added. “Seeya next week.”

Muguruza had dropped only 10 games — never more than two in a set — in her previous four straight-set victories at the tournament, including a 6-2, 6-2 quarterfinal win over 2020 Australian Open champion Sofia Kenin.

The two-time major winner got the first break of serve to lead 3-1 before Barty broke back. Muguruza broke again and had a chance to serve for the first set, before Barty went on a roll.

The Australian star used her slice backhand and drop shots to keep Muguruza moving around the court, and mixed some powerful forehands with variety — clinching the match with a lob.

Barty will get the day off Monday because the bottom half of the Australian Open women’s draw will be played on the first day, featuring Serena Williams starting another bid for a record 24th Grand Slam singles title, No. 3-ranked Naomi Osaka and No. 2-ranked Simona Halep.

The top half of the men’s draw is set for Monday, with Novak Djokovic starting his quest for a third consecutive Australian Open title with a first-round match against Jeremy Chardy and No. 3-ranked Dominic Thiem, the runner-up here last year, opening against Mikhail Kukushkin.

The 25-year-old Belgian has won 27 matches since the tour restarted in August, more than any other player on the women's circuit in that time.

The WTA Tour decided not to play a final for the Grampians Trophy because of a lack of time, meaning semifinal winners Anett Kontaveit and Ann Li will get equal points as winners.

The tournament was created for the players who had to go into hard lockdown during quarantine and weren't allowed out of their hotel rooms for practice. It started Wednesday and a full day of play was lost Thursday because of a temporary suspension of matches in all tournaments after a coronavirus scare.

At Rod Laver Arena, No. 4-ranked Daniil Medvedev improved his winning streak to 14 matches and secured Russia’s 2-0 win over Italy in the ATP Cup final when he beat Matteo Berrettini 6-4, 6-2.

Andrey Rublev had given Russia a commanding start with a 6-1, 6-2 win over Fabio Fognini.

Russia didn't lose a singles match during the group stage or the playoffs, and is the second team to win the ATP Cup after Novak Djokovic led Serbia to the inaugural title last year.

It was another step on the career ladder for Evans, who wasted three match points the last time he reached a final.

“My team has been there through some not so good times, so thanks for that,” he said.

He is seeded 30th for the Australian Open and will face fellow British player Cameron Norrie in the first round.

The 20-year-old Auger-Aliassime is still seeking his first title, having lost all seven finals he has contested on the ATP tour.

Sinner was going to have to recover quickly, with a first-round match against No. 11-seeded Denis Shapovalov at the Australian Open on Monday.