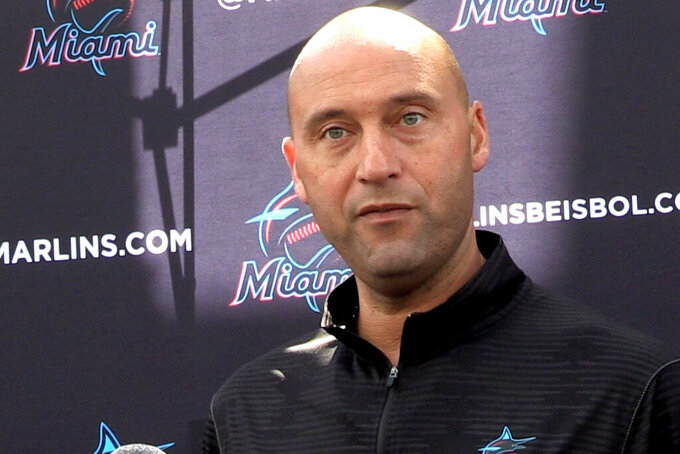 FILE - In this Feb. 24, 2020, file photo, Miami Marlins CEO Derek Jeter talks to the media before the team plays the St. Louis Cardinals in a baseball game in Jupiter, Fla. Jeter blames the team’s coronavirus outbreak on a collective false sense of security that made players lax about social distancing and wearing masks. Infected were 21 members of the team’s traveling party, including at least 18 players. (Charles Trainor Jr./Miami Herald via AP, File)

COOPERSTOWN, N.Y. (AP) — The Baseball Hall of Fame's class of 2020 has to wait a year to get inducted because of the coronavirus pandemic, but the careers of Derek Jeter, Ted Simmons, Larry Walker, and Marvin Miller are already being celebrated at the shrine.

The museum’s Inductees Exhibit is now open. It features one artifact for each honoree and includes: the Yankees helmet Jeter wore when he recorded his 3,000th career hit on July 9, 2011; Simmons’ AL championship ring won with the 1982 Milwaukee Brewers; a Rockies jersey worn by Walker in 1998 when he led the National League with a .363 batting average; and a timeline of Miller’s career as executive director of the players' union.

The exhibit will remain on display through next year and the Hall of Fame says additional artifacts may be added.

The class of 2020 and anybody elected next year will be inducted next July 25 in Cooperstown. This year's July induction was canceled in late April because of concerns about COVID-19.