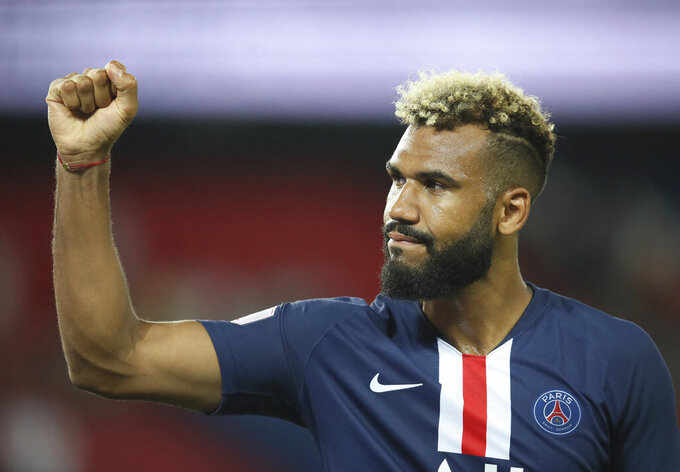 BERLIN (AP) — Bayern Munich ended the summer transfer period with a flurry of activity after failing to land its main targets to bolster its squad for a punishing schedule.

Bayern announced on Monday the surprise signing of 31-year-old forward Eric Maxim Choupo-Moting from Paris Saint-Germain, brought back Brazilian winger Douglas Costa in a loan deal from Juventus, and signed defender Bouna Sarr from Marseille as a backup option for compatriot Benjamin Pavard.

“Sarr is a dynamic right back who fits in very well with the way we approach our game,” Bayern sporting director Hasan Salihamidžić said.

The arrival of Sarr on a four-year deal will make it harder for 20-year-old American Chris Richards to break through after impressing with an assist on his first start for Bayern in Sunday’s 4-3 win over Hertha Berlin.

Bayern switched attention to Sarr after missing out on another young American, Sergiño Dest, who opted to join Barcelona.

Cuisance arrived at FC Bayern from Borussia Mönchengladbach in the summer of 2019. In his first season, the midfielder made eleven competitive appearances for the first team (1 goal), and five for the FC Bayern reserves (2 goals). The France U-20 international celebrated winning the treble as well as the German 3rd division championship in the summer.

Costa, who played for Bayern from 2015-17, is back for the season despite being called “a mercenary” by former Bayern president Uli Hoeneß when he left for Juventus. He scored three goals in 29 games for the Italian club last season, but his opportunities were limited by injuries.

Bayern had been hoping to sign English winger Callum Hudson-Odoi from Chelsea, but the teenager signed a new deal with the Premier League side to stay in London.

Choupo-Moting was available on a free transfer after his contract with PSG expired at the end of last season. He signed a contract through June 30 and will provide backup for star striker Robert Lewandowski.

“He gives our squad depth in attack, especially in the center, which we will need,” Salihamidžić said.

Bayern had been giving young players like Richards more game time this season following the departure of Ivan Perisic, who was on loan from Inter Milan.

The 17-year-old Jamal Musiala became Bayern’s youngest ever goal-scorer in the 8-0 rout of Schalke, while the 19-year-old Joshua Zirkzee is expected to be loaned out following Choupo-Moting’s arrival.

The 21-year-old Michaël Cuisance was sent on loan to Marseille for the season after failing to make the impact he expected after joining from Borussia Mönchengladbach in 2019.

Hertha signed French midfielder Matteo Guendouzi on loan from Arsenal for the season, Paraguay defender Omar Alderete from Swiss side Basel, and brought midfielder Eduard Löwen back ahead of schedule from a loan at Augsburg on Monday.

Hertha fans had been hoping for significant reinforcements with investor Lars Windhorst pumping more than $400 million into the club.

But managing director Michael Preetz complained on Sunday the market was “extra complicated” due to the coronavirus pandemic.

“We’ll all be happy when it’s closed,” Preetz said.

Leipzig signed midfielder Justin Kluivert –- the son of former Netherlands star Patrick Kluivert -– on loan from Roma for the season. The 21-year-old winger, who joined Roma from Ajax in 2018, scored five goals in 53 league games in Italy.

Also, Tottenham sent English defender Ryan Sessegnon on loan to Hoffenheim after he was left out of Jose Mourinho’s plans for the season.

The 20-year-old Sessegnon made only 12 appearances for Tottenham after joining from Fulham last year but none of them came after the pandemic interrupted the season. Sessegnon also hasn’t played this season and was in a match squad for only one Europa League qualifying game.

Hoffenheim also agreed on a loan deal for former Germany midfielder Sebastian Rudy from Schalke for the season. The 30-year-old Rudy returns for his third stint at the club. He has already made 227 Bundesliga appearances for Hoffenheim, more than any other player.

Schalke said that loaning out Rudy “financially unburdens” the club. Schalke is slashing costs as it tries to make up for years of big spending while the pandemic hits revenues, but it did manage to sign defender Kilian Ludewig on loan from Salzburg. The 20-year-old Ludewig was previously at English second division side Barnsley.