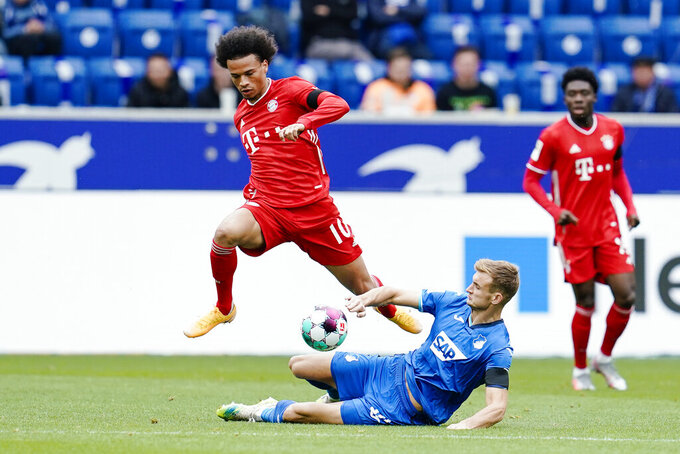 Sané injured an anterior cruciate ligament in his right knee last season while playing for Manchester City, causing him to miss almost the entire 2019-20 campaign.

Sané will not be able to feature on Wednesday in the Super Cup game against Dortmund and on Sunday in the Bundesliga game against Hertha Berlin, and likely also Germany's Nations League matches against Ukraine and Switzerland, and a planned Germany friendly against Turkey on Oct. 7.

Bayern's first game after the break is a postponed German Cup game on Oct. 15 against fifth-tier Düren.

Sané has started all three of Bayern's games since signing from City — scoring on his debut against his former club Schalke — and also two games for Germany against Spain and Switzerland this month. Sané last played on Sunday for 73 minutes in Bayern's 4-1 defeat to Hoffenheim, which ended a 32-game unbeaten run.

Flick said David Alaba was also an injury doubt ahead of the Dortmund game with an unspecified muscle problem.

Bayern has struggled with a packed schedule, not helped by last week's UEFA Super Cup against Sevilla, in which Bayern played 120 minutes to win 2-1. Flick said on Tuesday the club was considering more signings for extra depth before the transfer window closes on Monday.

Dortmund said winger Jadon Sancho and goalkeeper Roman Bürki would miss the game against Bayern because of respiratory tract infections. Both have tested negative for the coronavirus, the club added.