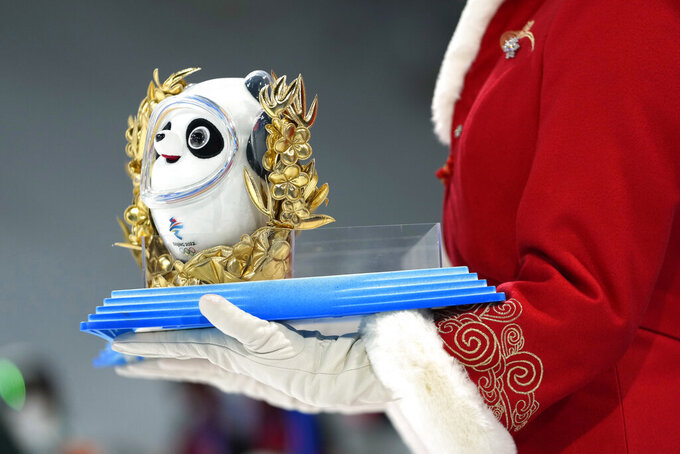 A mascot that is presented to the medal winners is seen during the award ceremony for the women's moguls at Genting Snow Park at the 2022 Winter Olympics, Sunday, Feb. 6, 2022, in Zhangjiakou, China. (AP Photo/Francisco Seco)

BEIJING (AP) — When most champions get off the slopes or the ice at the Beijing Olympics, they are handed Bing Dwen Dwen, the chubby panda mascot of the Games.

Where are the medals? They usually come later at a special ceremony — a system introduced in 1988 at the Calgary Games.

But immediately after competition, the winning athletes in Beijing receive a plush toy panda, stuffed inside a plastic shell that is meant to represent ice. Bing, in fact, means ice in Chinese. The toy is also adorned with a golden wreath.

Canadian snowboarder Mark McMorris won his third Olympic bronze medal on Monday and said he loved the prize that came with it.

“I always claimed back in the day that my spirit animal is a panda. I love pandas,” he said.

A similar ritual unfolded at the Pyeongchang Games four years ago. There, immediately after winning gold, silver or bronze, medalists got Soohorang, a striped white tiger that served as the mascot for those Games.

The tradition of giving a mascot to the winners has existed for more than a decade at the Youth Olympics.