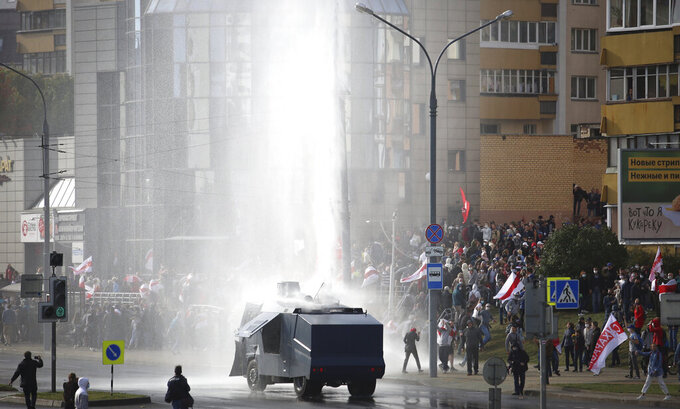 Police use a water cannon toward demonstrators during a rally in Minsk, Belarus, Sunday, Oct. 4, 2020. Hundreds of thousands of Belarusians have been protesting daily since the Aug. 9 presidential election. (AP Photo)

KYIV, Ukraine (AP) — Belarus' authoritarian president on Saturday visited a prison to talk to opposition activists, who have been jailed for challenging his re-election that was widely seen as manipulated and triggered two months of protests.

President Alexander Lukashenko spent more than four hours talking to his jailed political foes at the Minsk prison that belongs to Belarus' State Security Committee, which still goes under its Soviet-era name, KGB.

Lukashenko's office said that “the goal of the president was to hear everyone's opinion." Among 11 jailed activists who attended the meeting were several members of the opposition's Coordination Council and Viktor Babariko, the former head of a major Russia-owned bank. Babariko aspired to challenge Lukashenko but was barred from the race and remained in jail since his arrest in May on charges he dismissed as political.

Lukashenko's landslide re-election in the Aug. 9 vote was widely seen as manipulated amid widespread public frustration with the Belarusian leader's 26-year authoritarian rule, his cavalier response to the coronavirus pandemic and the deteriorating economy.

A violent crackdown on peaceful demonstrators in the first days after the vote, in which thousands were arrested and hundreds were beaten by police, provoked international outrage and helped swell protesters’ ranks.

The main opposition challenger in the vote, Sviatlana Tsikhanouskaya, who left for Lithuania after the election under pressure from authorities, cast Lukashenko’s visit to prison as a result of continuing demonstrations and urged keeping up a push for new elections.

“With this meeting, Lukashenko recognized the existence of political prisoners whom he previously dismissed as criminals,” she said in a statement. “Today’s event is a result of our pressure.”

The European Union and the United States said the election was neither free nor fair. They have slapped scores of Belarusian officials with sanctions for their role in the alleged vote-rigging and the crackdown on protests, but didn’t target Lukashenko himself.

EU members Poland and Lithuania have been especially outspoken in their support for Belarusian opposition politicians, leading to diplomatic tensions that have included Belarus' government expelling Polish and Lithuanian diplomats. Those two countries responded by withdrawing their ambassadors to Minsk.

Late Friday, Britain temporarily recalled its ambassador to Belarus, Jacqueline Perkins, in response to the Belarusian government’s decision to expel the Polish and Lithuanian diplomats.

In a tweet, Foreign Secretary Dominic Raab condemned the decision, labeling it as “completely unjustified.” He said the temporary recall of the ambassador “for consultations on the situation in Belarus” was intended to show “solidarity” with the people in the country.

The government has sought to stifle protests by detaining hundreds of demonstrators, prosecuting some top activists and forcing others to leave the country. However, massive demonstrations have continued, reaching their peak numbers on Sundays when up to 100,000 flood the streets of the Belarusian capital, Minsk. Another big protest is planned for this Sunday.

Hundreds of women marched through the Belarusian capital on Saturday to protest against political repressions and demand a new election. Several participants in the rally were detained.

Pavel Latushko, a former culture minister and ambassador to France, who joined the opposition's Coordination Council and was pressured by authorities to leave the country, said that the meeting reflected the Belarusian leader's weakness.

“Lukashenko was forced to sit down at the negotiation table with the people whom he jailed,” Latushko said in a statement, demanding the release of all political prisoners.

Observers saw Lukashenko's visit to prison as part of his efforts to steal the protesters' thunder by offering vaguely-described reforms, such as his proposal to draft a new constitution. During the meeting in prison, Lukashenko emphasized that “the constitution can't be written in the streets,” his office said without offering other details of the meeting.

“After two months of protests and harsh repressions, Lukashenko is moving to de-escalate the situation,” said Valery Karbalevich, an independent Minsk-based political expert.

“The discussion of a new constitution is an attempt by the government to imitate a dialogue. It would allow Lukashenko to drown the protests in talks, reduce tensions and enforce his agenda both inside the country and to foreign players,” Karbalevich said.