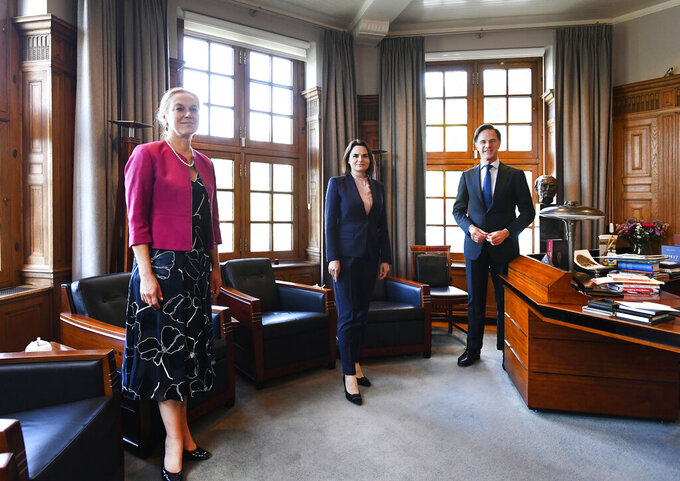 MOSCOW (AP) — Belarus’ authoritarian leader discussed closer economic ties with Russia on Friday, as he sought support from his main backer amid a bruising showdown with the European Union over the forced diversion of a passenger jet to arrest a dissident journalist.

Belarusian President Alexander Lukashenko has found himself increasingly isolated after flight controllers told the crew of a Ryanair plane to land in Minsk because there was a bomb threat against it. No bomb was found once the place was on the ground, but 26-year-old journalist Raman Pratasevich was arrested along with his Russian girlfriend.

EU leaders denounced it as a hijacking and piracy and responded by barring Belarusian carriers from the bloc's airspace and airports and advising European airlines to skirt Belarus. The bloc’s foreign ministers sketched out tougher sanctions Thursday to target the country’s lucrative potash industry and other sectors that are the main cash-earners for Lukashenko’s government.

The dispute has pushed Lukashenko, who has relentlessly stifled dissent during his rule of more than a quarter-century, even closer to Russian President Vladimir Putin, and the two met Friday in the Black Sea resort of Sochi for talks on closer economic ties, according to the Kremlin. Earlier in the day, the countries' prime ministers met in Minsk to pave the way for the presidents' talks.

“The events of the last days show a growing Western pressure on Belarus,” Belarusian Prime Minister Roman Golovchenko said during the meeting. “The EU has made a political decision to introduce sectoral sanctions in an apparent attempt to ruin our economy and create conditions for the repeat of coup attempts. In this situation, we count on the support of our closest ally, the Russian Federation.”

The two ex-Soviet nations have signed a union agreement that calls for close political, economic and military ties, but that stops short of a full merger. Moscow has helped buttress Belarus’ economy with cheap energy supplies and loans, but the ties have often been strained with Lukashenko scolding Moscow for trying to force him to relinquish control over prized economic assets and eventually abandon Belarus’ independence.

In the past, the 66-year-old Belarusian leader has tried to play the West against Russia, raising the prospect of a rapprochement with the EU and the United States to wring more aid out of Moscow.

Such tactics no longer work after Lukashenko’s brutal crackdown on protests last fall in the wake of a vote that handed him a sixth term but that the opposition said was rigged. More than 35,000 people were arrested amid the protests and thousands beaten — moves that made him a pariah in the West. The flight’s diversion has now cornered the Belarusian strongman even more.

The West had already slapped sanctions on Belarusian officials involved in the vote and crackdown against protesters and is now promising more. Many observers warn that Lukashenko has become easy prey for the Kremlin, which may use his isolation to push for closer integration. Some in the West have even alleged Russia was involved in the Ryanair flight’s diversion — something Moscow angrily denies — and will now seek to exploit the fallout.

“Lukashenko is scared, and the Kremlin may demand payment for its political support by pushing for the introduction of a single currency, the deployment of military bases and more,” said Valery Karbalevich, an independent Minsk-based political analyst. “In this situation, it would be much more difficult for him to resist and bargain with Putin."

Sviatlana Tsikhanouskaya, the top opposition candidate in Belarus' last election who left the country under official pressure, also acknowledged the danger that Russia may try to use Lukashenko's weakness to its advantage and urged the EU to use whatever influence it has to help prevent any deals with Moscow that would hurt Belarus.

Reflecting the difficult balance the West must strike, Tsikhanouskaya also urged the EU to be "stronger, braver in its resolutions and decisions,” charging that Lukashenko was acting out of a sense of impunity in diverting the flight.

In addition to its threat of sanctions, the EU also tried another tactic. Its executive European Commission presented a 3 billion-euro ($3.7 billion) aid plan on Friday to support “a future democratic Belarus” that could be activated if the country moves toward a “democratic transition.”

But in a further sign of Belarus’ isolation, the Geneva-based European Broadcasting Union moved Friday to suspend the Belarusian state broadcaster, BTRC, saying it has been particularly worried by its broadcast of interviews apparently obtained under duress. BTRC has two weeks to respond before the suspension comes into effect. The move would bar Belarus from taking part in the Eurovision Song Contest, among other things.

Lukashenko said before departing for Russia that he hopes to reach an agreement with Putin on resuming regular flights between the two countries that have been suspended because of the coronavirus pandemic.

Moscow has already offered Lukashenko quick political support over the plane’s diversion, cautioning the EU against hasty action until the episode is properly investigated and arguing that Lukashenko’s actions were in line with international protocols in cases of bomb threats. The International Civil Aviation Organization said Thursday that it will investigate the diversion, as many Western countries have asked.

As European airlines seek to skirt Belarus, Russia has refused some requests to change the flight paths of service to Moscow over the past two days in an apparent gesture of support for Lukashenko but allowed some flights to proceed Friday.

Associated Press writers Yuras Karmanau in Kyiv, Ukraine, Mike Corder in The Hague, Netherlands, Geir Moulson in Berlin and Raf Casert and Samuel Petrequin in Brussels contributed to this report.