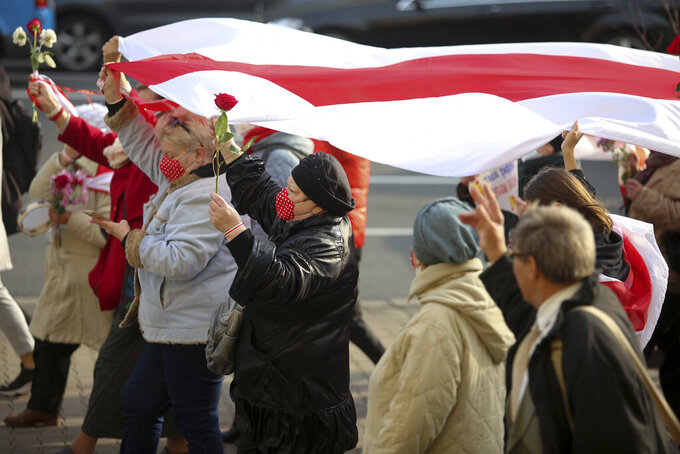 People, most of them pensioners, carry a big old Belarusian national flag during an opposition rally to protest the official presidential election results in Minsk, Belarus, Monday, Oct. 26, 2020. Factory workers, students and business owners in Belarus have started a general strike, calling for authoritarian President Alexander Lukashenko to resign after more than two months of mass protests triggered by a disputed election. (AP Photo)

KYIV, Ukraine (AP) — Belarus' authorities on Thursday shut the borders with several neighbors for most travelers amid the government's efforts to end 2 1/2 months of protests demanding the resignation of the country's authoritarian leader.

Belarus' Border Control Committee said the closure of borders with Latvia, Lithuania, Poland and Ukraine is intended to stem the coronavirus infection. The move, however, follows Belarusian officials' claims that its neighbors have tried to destabilize the situation in the country.

The movement of cargo across the border has continued unhindered, and the international airport in the Belarusian capital, Minsk, has maintained its usual operations. The border with Belarus' giant eastern neighbor, Russia, has remained open.

Belarus has been swept by massive protests against President Alexander Lukashenko's 26-year rule since the Aug. 9 election, in which he was declared the winner by a landslide. The opposition has rejected the official results as rigged and demanded that Lukashenko step down.

Police detained thousands and brutally beat hundreds of peaceful demonstrators during the first few days of post-election protests, drawing global outrage and prompting the U.S. and the European Union to introduce sanctions against Belarusian officials accused of vote fraud and the clampdown on demonstrations.

Lukashenko’s main election challenger, Sviatlana Tsikhanouskaya, who left for Lithuania under pressure from authorities after the vote, had declared a nationwide strike starting Monday after her ultimatum for Lukashenko to resign expired Sunday.

Sunday’s rally in Minsk was one of the largest since the start of the protests, drawing nearly 200,000 people, but Tsikhanouskaya's call for a strike has failed to halt production at major state-run plants and factories making up the core of the Belarus economy. While thousands of students and retirees marched in Minsk, and some small business owners closed their doors, most state enterprises have continued to operate as usual.

“I wouldn't say publicly what action we are taking and will take on the border, but I need military people in charge there,” Lukashenko said during a meeting with officials. He first announced the closure of the borders last month, but they remained open until Thursday.

Tsikhanouskaya charged that the Belarusian government's decision to shut the border and a reshuffle of top officials reflected Lukashenko's nervousness.

“The closure of the borders and the latest appointments signal the weakening of his authority,” Tsikhanouskaya said, commenting on Lukashenko's latest moves. “He makes inconsequent decisions because he's in panic."