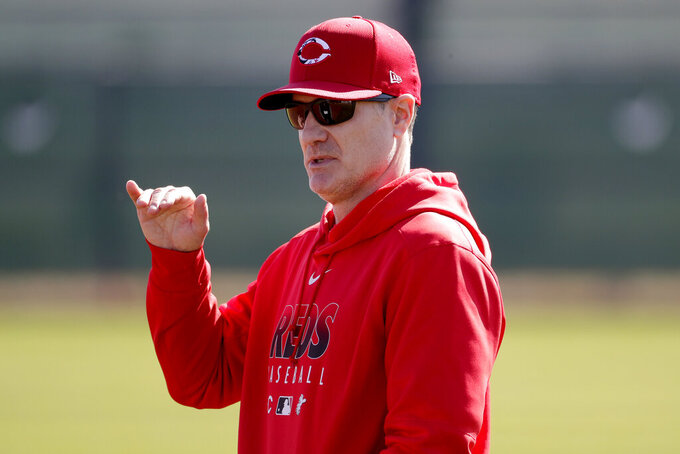 FILE - In this Saturday, Feb. 15, 2020, file photo, Cincinnati Reds manager David Bell talks during the teams' first spring training baseball workout in Goodyear, Ariz. Just when the Cincinnati Reds started to roll last year, the strange, pandemic-shortened season came to an end after 60 games. But manager David Bell saw his team developing cohesiveness and momentum down the stretch he believes can carry over into 2021. (AP Photo/Matt York, File)

Just when the Cincinnati Reds started to roll last year, the pandemic-shortened season came to an end after 60 games. But manager David Bell saw his team developing cohesiveness and gaining momentum down the stretch that he believes can carry over into 2021.

The third-year Cincinnati skipper makes a fair point. The Reds won 11 of their last 14 in September, finished 31-29 and squeezed into the postseason for the first time in seven years. Bell noted the Reds were finally surging after 60 games, which would have been a little more than a third of the way into a typical 162-game season.

“The big difference is that this group is going to have a chance to show what they can do over the course of a long year,” Bell said Wednesday as pitchers and catchers reported to the Reds’ Goodyear, Arizona, spring training headquarters.

“It’s not exactly the same team — we lost a couple guys, but for the most part it’s the same group,” he said. “And it’s the same group that through great challenges over the last couple of years, especially last year, really overcame a lot. There were several times last season when things could have gone the other way, and guys stayed with it. It was important to our players and our team to continue building a winning environment, and it finally showed up the last two weeks of the season."

Before the 2020 season, the Reds had spent big money to add second baseman Mike Moustakas and outfielders Nick Castellanos and Shogo Akiyama for some offensive push. But this offseason saw more key players subtracted than added.

Right-hander Trevor Bauer parlayed his 1.73 ERA and NL Cy Young Award into a three-year, $102 million contract with the reigning World Series champion Los Angeles Dodgers. Cincinnati traded closer Raisel Iglesias and his $9 million salary to the Los Angeles Angels, and regular shortstop Freddy Galvis signed with the Baltimore Orioles. Those holes will have to be filled from among the players who are left and a few below-the-radar additions.

Right-hander Sonny Gray, a candidate to be the opening-day starter for the second straight season, said he understands why the Reds couldn't engage in splashy free-agent spending again but said the nucleus of a group that turned a corner last season is still there.

“We started a little slow last year and we kind of caught our little groove. If anyone can remember the way that last month and a half went for us, we were winning series, we were winning pretty much every series," Gray said.

“We made this push and we slowly kind of get the feeling as a team and we get the feeling as an organization that we're making this push up,” he said. "We haven't been in any type of playoff or postseason position in awhile. You get that feeling, and as a player you're like, let's keep that feeling, let's keep that momentum rolling through the offseason and come into spring with that same momentum, that same feeling of we're close, we're there, we're finishing so strong.”

There is still plenty of COVID-19 uncertainty, of course, and a 162-game season isn't a sure thing. Bell said the unpredictable 2020 season will make it easier for everyone to roll with the sudden changes that are likely to come.

“I think we did learn things that will stay with us forever,” he said. “You’re forced to be more efficient, you’re forced to think outside the box a little bit. I think the one thing I keep coming back to is just being grateful for being here. I think any time you can see the good in a situation, which is really easy to do with what we get to do, and not spend any time focused on the challenges of it or the negativity or the complaining. I think that can really drag you down.”