Bellator MMA gets back into US spotlight with Showtime move 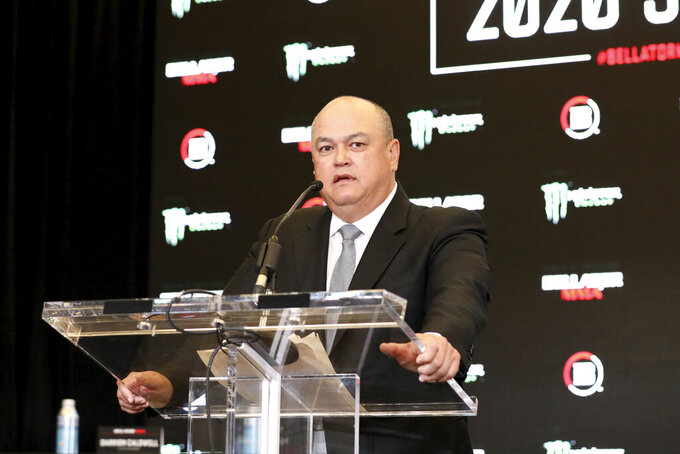 FILE - In this Monday, March 9, 2020 file photo, Bellator President Scott Coker speaks at a news conference promoting the Bellator Spring & Summer fight cards in New York City. Bellator President Scott Coker believes he put on some of the best fight cards in his promotion's history over the past two years while building a roster and a product capable of drawing attention across the world. The first of three consecutive weekly cards in April is headlined by a featherweight grand prix semifinal between champion Patricio “Pitbull” Freire and Emmanuel Sanchez. (AP Photo/Gregory Payan, File)

LOS ANGELES (AP) — Bellator President Scott Coker believes he put on some of the best fight cards in his promotion's history over the past two years while building a roster and a product capable of drawing attention across the world.

Yet only hard-core combat sports fans got to see many of those bouts because Bellator aired on DAZN, the subscription streaming service that doesn't reach nearly as many American viewers as, say, cable television.

Bellator's imminent move to Showtime is an opportunity for Coker to reunite with dozens of people he has known since his now-defunct Strikeforce promotion aired on the network 13 years ago when mixed martial arts first entered the U.S. sports mainstream.

Showtime also provides a chance to put Bellator's increasingly stacked fighter roster in front of many more American eyes than the promotion has attracted in recent years. At the same time that Bellator went behind the online subscription curtain with DAZN in 2018, the UFC became ubiquitous on ESPN.

While Coker still speaks warmly of DAZN and the lucrative deal that ended abruptly amid the coronavirus pandemic, he's grateful to put his fights under the U.S. spotlight they deserve.

“I feel like it's a natural team,” Coker said. “When it comes to combat sports, they're masters of storytelling and building fighters, so it feels really good. You just plug us into that machine, and here we go.”

The Showtime deal begins Friday when the promotion stages Bellator 255 at a mostly empty Mohegan Sun Arena in Uncasville, Connecticut. The first of three consecutive weekly cards in April is headlined by a featherweight grand prix semifinal between champion Patricio “Pitbull” Freire and Emmanuel Sanchez.

The broadcast pairing is a natural for Bellator and Showtime, which are both owned by media conglomerate ViacomCBS. But it makes sense for Bellator in pure exposure, which the promotion has lacked over the past 2 1/2 years.

Bellator moved to DAZN in the summer of 2018 with a much-heralded multiyear deal, but the over-the-top streaming service and Bellator abruptly cut ties late last year after the pandemic threw the economics of sports into upheaval. Bellator moved some of its fights last fall to CBS Sports Network while DAZN shuffled its properties, which also included ending its massive contract with Canelo Alvarez after a lawsuit from the boxing superstar.

Neither Bellator nor DAZN has commented much on the reason for their split, and Coker said he doesn't harbor any ill feeling toward the platform that reportedly paid an extraordinary amount for his product during its combat sports spending spree, but hasn't yet succeeded in compelling all fans to pony up the cash for a monthly subscription.

“We had a good relationship with DAZN, and I think we put out some great fights,” Coker said. "I think we did our part, and then I think COVID hit, and that just changed everything, because everybody had to take a step back. But the problem is we have a business to run, and we had 250 fighter contracts we have to fulfill, so we had to keep going, and I think that the relationship unwound at that point.

“But listen, I wish them well. There’s good people over there, and who knows what will happen in the future? You never know.”

Coker's job is to balance the relationship between media exposure and financial rewards, and he seems comfortable with the promotion's current mix. Bellator also recently reached a deal to put its shows on the BBC iPlayer in Britain, connecting the promotion with another high-profile media company.

As for another important part of the MMA business, Coker isn't currently planning to welcome North American fans into arenas anytime soon. Although Bellator held a few shows in Europe last fall, it has stuck to the casino arena in Connecticut to produce all of its North American shows since July.

Coker is being more deliberate than UFC President Dana White, who is staging his next two pay-per-view shows in front of full houses in Florida and Texas despite the ongoing pandemic.

“At the end of the day, I feel like as a community, as a country, as a civilization, we’re almost at that point where I feel like we’re getting through this,” Coker said. “And I’d hate to be one of the contributors to bringing it back by making quick moves like that.”