Better late than never as Clarey gets Olympic medal at 41 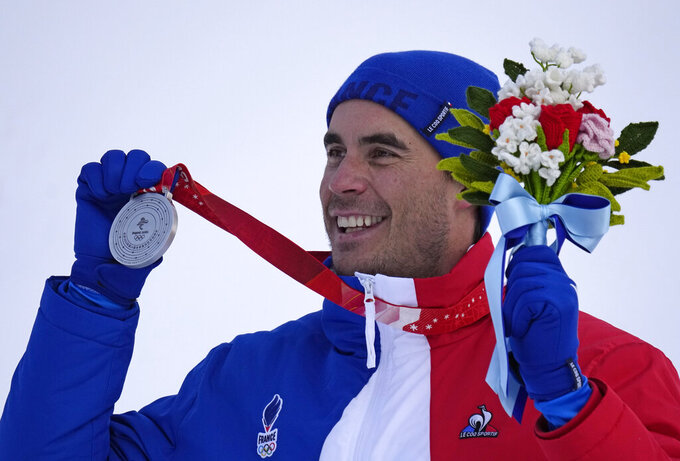 Johan Clarey, of France, silver, reacts during the medal ceremony for the men's downhill at the 2022 Winter Olympics, Monday, Feb. 7, 2022, in the Yanqing district of Beijing. (AP Photo/Luca Bruno)

BEIJING (AP) — Johan Clarey tends not to be in much of a rush when it comes to anything other than speeding down a hill on skis. Add Olympic success to the list of things he's waited for.

The Frenchman, who turned 41 last month, became the oldest man to win an Olympic medal in Alpine skiing when he claimed a silver behind Beat Feuz of Switzerland in the downhill at the Beijing Games on Monday.

The previous oldest was Bode Miller, who was 36 when he took bronze in super-G in 2014.

“Everything came late in my life. Since I was a young boy, that’s what my mother said,” Clarey said. “I take extra time to do everything — walking and speaking and everything. Apparently, my career started quite the same.”

This was Clarey’s fourth Olympics and realistically his last shot of being on the podium at a Games. His best previous finish in an Olympics was 18th in the downhill in 2018.

“I took a lot of risk. I knew I had only one chance left in my career to get a medal in the Olympics,” he said. “And when I was going down, I knew I made a good run, but you never know in downhill. Sometimes you’re fast, sometimes you’re not. You never know why. But today was fast."

Clarey was just 0.10 seconds behind Feuz on Monday — and 0.08 ahead of two-time Olympic gold medalist Matthias Mayer of Austria, who claimed bronze.

This was only Clarey's second medal at a major championship; he also took home a silver in the super-G at the 2019 world championships.

And Monday's big moment almost didn’t happen: Clarey had considered retirement. He said he's been having doubts about whether to continue competing for six years.

That, he says now, was “a good choice” — because he has the medal to prove it.

Clarey is still not quite ready to quit. He will turn his attention back to the World Cup circuit, where he has two second-place finishes this season to take his tally of podium finishes to nine in his career.