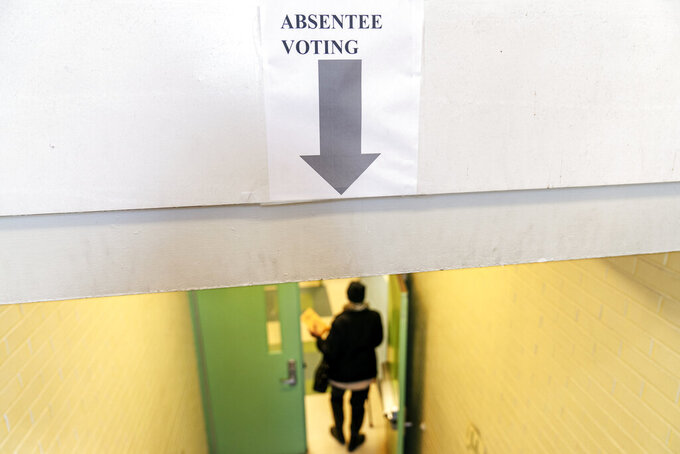 A voters enters to fill out a ballot on the last day of early absentee voting before tomorrow's general election at the Northwest Activities Center in Detroit, Monday, Nov. 2, 2020. Down to the wire with the threat of court battles looming, supporters of former Vice President Joe Biden scrambled Monday to rally swing-state voters to drop off ballots, visit precincts in person and ensure their votes are counted. (AP Photo/David Goldman)

PHILADELPHIA (AP) — Down to the wire with the threat of court battles looming, supporters of former Vice President Joe Biden scrambled Monday to rally swing-state voters to drop off ballots, visit precincts in person and ensure their votes are counted.

As months of President Donald Trump undercutting the legitimacy of mail-in votes gave way to promises he would challenge them in court, both sides made a final push to ensure their supporters turned out, even with the lingering threat of lawsuits aimed at invalidating ballots.

“Do not put ballots in the mail. Hand-deliver your mail ballot to your county election office, satellite election office or other designated drop box or drop-off location,” Pennsylvania’s top election official, Secretary of State Kathy Boockvar, a Democrat, said Monday. “Do it today. Do not wait.”

With about 700,000 of some 3.1 million requested mail ballots in Pennsylvania still outstanding, some voters like 57-year-old Daniel Pigott took the warning to heart.

Pigott stood in a line of dozens of voters outside the Bucks County government building on a blustery Monday waiting to cast his vote after being alerted there was a problem with his mail-in ballot.

“In a normal election, would I do all this?" asked Pigott, who voted for Biden. "Nah, probably not.”

Roughly 300 lawsuits already have been filed over the election in dozens of states across the country, many involving changes to normal procedures because of the coronavirus pandemic, which has killed more than 230,000 people in the U.S. and sickened more than 9 million.

Pennsylvania, where the candidates appeared to be divided by a razor-thin margin for the state’s 20 electoral votes, seemed likely to be the epicenter of any post-election litigation. The deadline for receiving and counting absentee ballots is Friday under an extension ordered by the state’s top court, a ruling that the Supreme Court left in place but suggested it would be open to revisiting.

Trump called the decision a “horrible thing” and warned “as soon as that election’s over, we’re going in with our lawyers.” He added: “If people wanted to get their ballots in, they should have gotten their ballots in long before that.”

Pennsylvania Attorney General Josh Shapiro, a Democrat, insisted in an interview Monday that all votes would be counted and said he was encouraged the state prevailed in lawsuits filed by Trump and his supporters: “We have lawyers and agents fanned out all across Pennsylvania prepared to deal with whatever may come."

In a tweet, he expressed confidence as he taunted Trump: “If your lawyers want to try us, we’d be happy to defeat you in court one more time.”

The Supreme Court’s openness to revisiting its prior ruling, though, and the presence of a new Trump appointee on the high court, Justice Amy Coney Barrett, left others feeling anything but certain.

“Make sure, regardless what happens with litigation, that your vote is counted,” said Sylvia Albert, director of voting and elections for Common Cause, which called for Barrett to recuse herself from any potential election litigation. “To me, it seems a clear voter-suppression tactic and an effort to invalidate ballots" that a party does not think are for them.

Stung by 2016 and conscious that voter surveys could be wrong, the same note of caution pervaded the country a day ahead of an anything-but-typical election.

In Wisconsin, which Trump won by fewer than 23,000 votes four years ago, both sides called on supporters to get out to vote after a Supreme Court ruling last week rejected Democrats’ attempt to allow ballots postmarked by Election Day to be counted for six more days.

All absentee ballots must be received in Wisconsin by the close of polls on Tuesday night. About 175,000 of more than 1.2 million requested ballots remained outstanding. At news conferences and public events and on social media campaigns, voters were told not to count on the mail.

“All our efforts right now are focused on doors, phones, texts and emails,” said Wisconsin Republican Party spokesman Alec Zimmerman, urging voters to do in-person balloting or use 39 drop boxes around the state.

State Attorney General Josh Kaul, a Democrat, said the number of outstanding mail ballots was not a cause for concern, saying some people who request them “ultimately decide to vote in person.”

In Michigan, Democrats blitzed voters by phone, text, email, social media and the occasional door-knock with pleas to take ballots to a drop box or local clerk’s office, or vote in person on Tuesday.

Darnesha Coleman, 32, stood in a long line Monday alongside her 80-year-old grandmother to vote at a Detroit polling place after absentee ballots they requested never showed up. She worries that voting changes forced by the pandemic could jeopardize the election's outcome.

“It is quite chaotic,” she said. “It’s not like it usually is. I don’t think it’s going to go like it’s supposed to.”

Michigan Secretary of State Jocelyn Benson first advised voters Oct. 20 to hand-deliver ballots instead of relying on the mail, a message she has since repeated.

“We are too close to Election Day, and the right to vote is too important, to rely on the Postal Service to deliver absentee ballots on time,” she said last week.

The Michigan Democratic Party blitzed voters by phone, text, email and social media -- and in some cases door-knocking -- Monday with pleas to take ballots to a drop box or local clerk’s office, or vote in person Tuesday, chair Lavora Barnes said.

Democratic Party Chairman Ken Martin said officials were reaching out to voters with unreturned absentee ballots, and Democratic Sen. Tina Smith, who is up for re-election Tuesday, created a television ad to tell voters what they need to do to make sure their votes count.

In Minnesota, elections officials reminded voters it was too late to return absentee ballots after a federal appeals court ruling that those arriving after Election Day should be separated from other ballots, raising the possibility that they may be challenged and invalidated.

Erik Carbonell, a 22-year-old nursing student in Minneapolis, was among those turning out in person, worried about “potential discrepancies” with mail-in ballots.

“I didn’t want to potentially lose my vote," he said.

The Postal Service said it could not guarantee ballots mailed after Oct. 27 would arrive by Election Day, a message at the heart of candidates’ last-minute pleas for support.

“GEORGIA,” tweeted Jon Ossoff, a Democratic candidate for the Senate. “Make your plan to vote ASAP. Find your absentee ballot Drop Box. If you requested an absentee ballot and still haven’t gotten it, vote in-person on Election Day (Tuesday, Nov 3) instead.”

Democrats have requested far more mail ballots than Republicans, but have also generally returned them at a brisker clip, making outstanding ballots in many states closely divided between the parties.

Whatever uncertainty remains about Tuesday, many people are resigned to ongoing disputes. Brookings Institution elections expert Elaine Kamarck sees litigation as inevitable, even as she says most voters should be “not very concerned” about getting their ballots counted because the law is on their side.

“The Constitution is pretty damn clear: States have the authority for running elections and particularly presidential elections. So as long as a state makes clear what its parameters are, the courts are loath to intervene,” said Kamarck, a member of the Democratic National Committee. “I think the way voters should look at this is if it is a razor-thin race in some state, and that state makes the difference for one candidate or another getting to 270 electoral votes, then every single thing is going to be litigated.”