Biden, once an orator, reaches for rhetorical flourish again 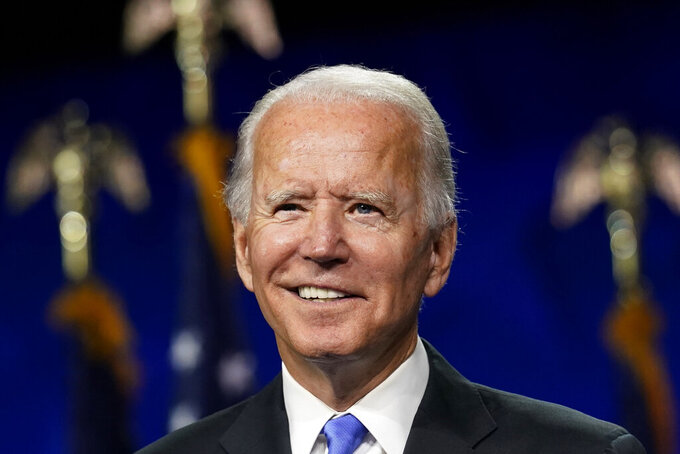 WASHINGTON (AP) — The early months of Joe Biden’s third White House bid were marked with uneven debate performances and winding town halls in Iowa and New Hampshire. That contrast to the loquacious, eloquent young senator who first sought the presidency 33 years ago, struck even some friendly Democrats and fed the Republican narrative that the 77-year-old was no longer fit to lead.

Biden did much to dispel that caricature Thursday night during his 24-minute address accepting the Democratic Party’s presidential nomination. His performance validates at least some of the frustrations the former vice president and his aides have expressed privately through months of viral videos of “Biden gaffes” and the “Sleepy Joe” invective peddled by President Donald Trump, himself a septuagenarian who mangles syntax and regularly speaks or tweets meandering, nonsensical thoughts.

“It was a beautiful, powerful speech that hit so many notes,” said Karen Finney, a Democratic strategist who worked for nominee Hillary Clinton’s campaign in 2016.

Political observers from both parties broadly agreed that Biden exceeded the expectations Trump had set for his Democratic rival with months of attacks. But some Republicans and Democrats said Trump may also have helped Biden by reducing expectations for anyone seeking the presidency.

“For 24 minutes, every American who watched it escaped our current reality and was imagining a world without Donald Trump. And that alone made it a good speech,” said Rick Tyler, a Republican strategist and outspoken critic of the president.

Trump’s quips about Biden’s age and mental acuity “may have lowered the bar” for Biden, Finney added, “but Trump has also lowered the bar on the presidency” with constant, personal attacks on political rivals, media critics and even many Republicans. “So part of what Biden did is remind people that it’s OK to raise that bar again,” Finney said.

Both men have more tests upcoming. Republicans convene their convention Monday, and Trump’s acceptance speech is set for Thursday from the White House lawn. Biden has a sit-down interview alongside his running mate, Kamala Harris, that will air Sunday on ABC.

Trump, 74, has stumbled through some of his own interviews recently, bragging to Fox News that he had passed a physician’s cognition test meant to flag signs of dementia in older patients. Days later, Trump repeatedly misrepresented the U.S. response to the COVID-19 pandemic and the spread of the virus in an interview with Axios. Nonetheless, the president boasted to Fox News anchor Chris Wallace that Biden couldn’t endure the pressures of such interviews.

“Let Biden sit through an interview like this. He’ll be on the ground crying for Mommy,” said Trump, who like Biden speaks in notably different clips than he did when he was younger.

Biden has done many interviews with local network affiliates in battleground states since clinching the Democratic nomination, but national interviews and press conferences have been rare.

For now, the former vice president is relishing a speech that evoked an earlier period of his career.

A Washington Post analysis in 1986, as Biden hopscotched the country to state Democratic Party dinners ahead of his first presidential bid, described “his capacity for stirring sparks in the burned-out and broken-hearted” with “pyrotechnic burst of quotations from the Kennedys and Martin Luther King Jr.”

He launched his first presidential bid a year later as a 43-year-old senator calling for generational change. “’We must rekindle the fire of idealism in our society, for nothing suffocates the promise of America more than unbounded cynicism and indifference,” he said, evoking John F. Kennedy in a speech at the Amtrak station near his residence in Wilmington, Delaware.

Joe Trippi, who worked for Biden rivals Gary Hart and Dick Gephardt that cycle, compared him to candidate Barack Obama in 2008.

“He was the new, young senator, up-and-coming. Strong orator and not of Washington yet,” said Trippi, a veteran Democratic strategist.

Still, Biden’s weaknesses were visible. The same Washington Post writer who lavished praise noted his penchant for asking “such wordy, windy, discursive questions” that he’d exhaust most his time in Senate committee hearings. Freed from such limits on the campaign trail now, Biden sometimes cuts off his own answers: “I know I’ve gone on too long.”

Biden also has never hidden that he’s a stutterer, for decades telling of how he’d memorize works of his favorite Irish poets and recite them in the mirror as a boy. Seamus Heaney earned a spot in Biden’s acceptance speech Thursday as he called for America to “make hope and history rhyme.”

But his private challenge has figured more prominently in 2020 than before. Biden’s most in-depth interview as a 2020 candidate came for a magazine profile on him as a stutterer. And on the night he accepted the Democratic nomination, he was hailed by 13-year-old Brayden Harrington for helping the boy overcome his own stutter.

Biden has long been famous for verbal missteps beyond any stutter, a point the Trump campaign has zeroed in on in viral videos and memes. This campaign cycle, he’s referred to Vermont when he’s in New Hampshire and said that any Black American voting for Trump “ain’t Black.” The catch-all explanation from Biden allies is that he’s “authentic.”

Kathleen Hall Jamieson, a University of Pennsylvania professor who has written extensively on political communication, said video compilations of such mistakes are irrelevant, noting that similar ones could be put together for anyone who speaks publicly. She added that such clips on older candidates also risk stirring voters’ unconscious age biases.

She said prepared speeches and even debates, during which candidates lean heavily on practiced talking points, don’t necessarily offer voters the right window to a candidate’s mind, either.

The professor argued that the more important test for Biden and Trump would be extended “extemporaneous” interactions with voters or journalists asking tough follow-up questions. She noted Trump already has shown that he “wanders all over the place” in interviews even on focused topics. Biden, she said, owes it to voters to do more interviews.

“We’re trying to figure out whether these people have a capacity to govern,” she said. “Can they absorb evidence and provide a coherent answer? The question is: Who are we going to get as president?"