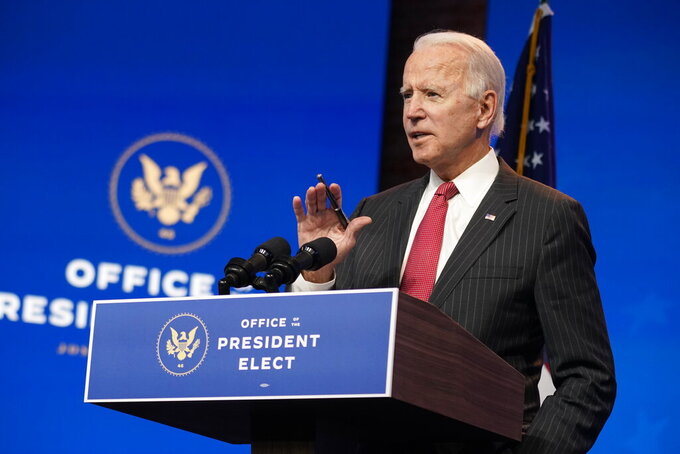 WASHINGTON (AP) — President-elect Joe Biden said Thursday that he has decided whom to nominate as his secretary of the Treasury Department.

Biden said that the announcement will come just before or after Thanksgiving and that “you’ll find it is someone who I think will be accepted by all elements of the Democratic Party, progressives through the moderate coalition.”

Also mentioned as possible candidates are former Fed vice chair Roger Ferguson and Raphael Bostic, the president of the Federal Reserve Bank of Atlanta. Both Bostic and Ferguson are Black, and either would be the first Black treasury secretary. Bostic is also the first openly gay president of a regional Fed bank.

Many progressives believe Yellen was mistreated by President Donald Trump, who broke with recent precedent and declined to reappoint her as Fed chair. Yellen's two immediate predecessors, Ben Bernanke and Alan Greenspan, were both reappointed by Democratic presidents, after being first appointed by Republicans, as a gesture toward the nonpartisan nature of the Fed.

Brainard also advised President Bill Clinton and was floated as a potential treasury secretary if Hillary Clinton had won the 2016 election. She has been a leading voice for lower interest rates at the Fed and has also been a consistent vote against the Fed's moves in the past two years to loosen bank regulations.

Jeff Hauser, executive director of the Revolving Door Project, a left-leaning organization, said progressives would prefer to see Yellen or Bostic. Yellen is an expert on unemployment, an advantage given the still-elevated national unemployment rate of 6.9% during the coronavirus pandemic.

She has also engaged this year on the issue of climate change and has endorsed a carbon tax as a way to reduce the emission of greenhouse gases.

Yellen was an economic adviser to Biden's campaign. As a former Fed chair, she is also a familiar figure to Wall Street, which closely follows the treasury secretary's remarks.

Biden spoke to reporters after participating in a video conference with a group of governors from both parties, telling them he wanted to be their partner in the White House. The governors talked about the need for government officials to be clear with Americans about what to expect as the virus surges. He says, “They all acknowledge this is going to take a massive education campaign.”

Biden’s treasury secretary would lead his economic team as many businesses and Americans struggle while the pandemic continues.