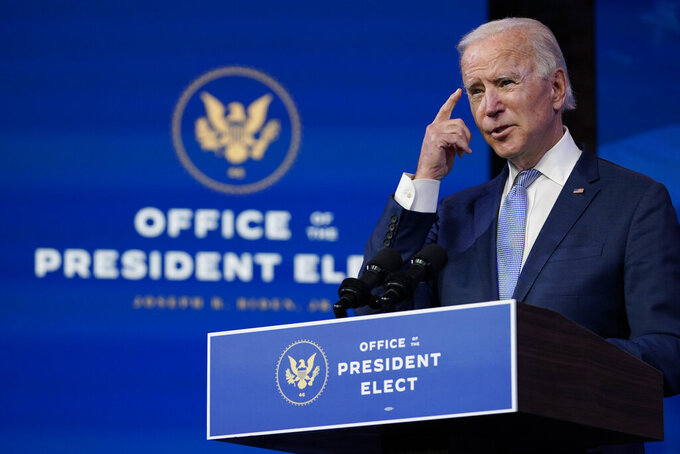 President-elect Joe Biden speaks at The Queen theater in Wilmington, Del., Wednesday, Jan. 6, 2021. Biden has called the violent protests on the U.S. Capitol "an assault on the most sacred of American undertakings: the doing of the people's business." (AP Photo/Susan Walsh)

WILMINGTON, Del. (AP) — President-elect Joe Biden called Wednesday for the restoration of “simple decency” as a mob incited by his predecessor stormed the U.S. Capitol and delayed Congress from certifying the results of November's election.

Biden had planned to deliver a speech focused on how to revive the economy and provide financial relief for small-business owners reeling from the coronavirus pandemic, giving routine political remarks from a theater in his native Delaware. But shortly before he was to begin speaking, demonstrators broke into the Capitol building, reaching as far as the Senate floor.

“Our democracy is under unprecedented assault unlike anything we’ve seen in modern times,” Biden said adding that the violent and chaotic events were “an assault on the rule of law.”

The Capitol building was locked down and police moved in with guns drawn as Vice President Mike Pence and lawmakers were evacuated to secure locations. National Guard troops were deployed and a citywide curfew called for shortly after dusk, as rioters continued to occupy the seat of Congress for hours.

“I call on this mob to pull back and allow democracy to go forward,” said the president-elect.

In an address that took only about 10 minutes and was televised against a split screen of the still-occupied Capitol building, Biden attempted to project calm and to say that a deeply divided country can still come together. He returned to themes that were a centerpiece of his presidential campaign, including finding common political ground, and pledged to be president for all Americans, even those who didn't vote for him.

The unrest erupted as a joint session of Congress had convened to certify Biden’s election victory over President Donald Trump. But, in anticipation of that occurring, thousands of pro-Trump demonstrators amassed outside the Capitol. The president himself addressed the crowd, which cheered his baseless claims of voter fraud and were protesting the results of a free and fair election.

Trump’s supporters then moved to besiege the Capitol — triggering unsettling scenes of disorder unlike anything Washington has seen in recent memory. The mob was eventually cleared out of the building and Congress moved to resume certification.

Biden stopped short of accusing Trump of treason but said what happened “borders on sedition.”

Biden called on Trump to “go on national television now, to fulfil his oath and defend the Constitution and demand an end to this siege.”

Instead, Trump released a video hours after the unrest began declaring, “I know your pain. I know your hurt. But you have to go home now.” He went on to call the supporters “very special.”

White House press secretary Kayleigh McEnany also joined top congressional Republicans in urging an end to the violence and for the mob to leave the Capitol.

Biden has said previously that pursuing criminal action against Trump might not be “good” for American democracy, though he wouldn't block future, independent Justice Department investigations into Trump once he leaves office.

There may be calls now for Biden to rethink that.

“The events of today really demonstrate that, for some people, rules do not matter, so you kind of have to govern that way," said Alicia Garza, head of the Black to the Future Action Fund, an advocacy group that works to empower Black Americans in politics. “I would imagine that Joe Biden now understands that his role has completely shifted. He’s going to have be — not the uniter in chief, he’s going to have to be the decider in chief.”

Biden’s original speech was delayed by more than an hour as his aides tore up the original, scheduled remarks and worked to craft a new statement that could address what was unfolding more than 100 miles away in the nation's capital.

There didn’t appear to be additional security around Biden or his motorcade. But as the president-elect huddled backstage, agents on his U.S. Secret Service detail stood in their places in front of the stage where he was set to speak, which featured four American flags, for more than hour.

Upon beginning his speech, Biden said the events at the Capitol “do not reflect a true America. Do not represent who we are.”

“The work of the moment and the work of the next four years must be the restoration of democracy, of decency, of honor, of respect, the rule of law,” he said. “Just plain, simple decency. The renewal of a politics that's about solving problems, looking out for one another, not stoking the flames of hate and chaos.”

After concluding his remarks, the president-elect answered a journalist's question about whether he was worried about his safety on Inauguration Day in Washington on Jan. 20.

“I am not concerned about my safety, security or the inauguration," Biden said. "The American people are going to stand up, stand up now. Enough is enough.”