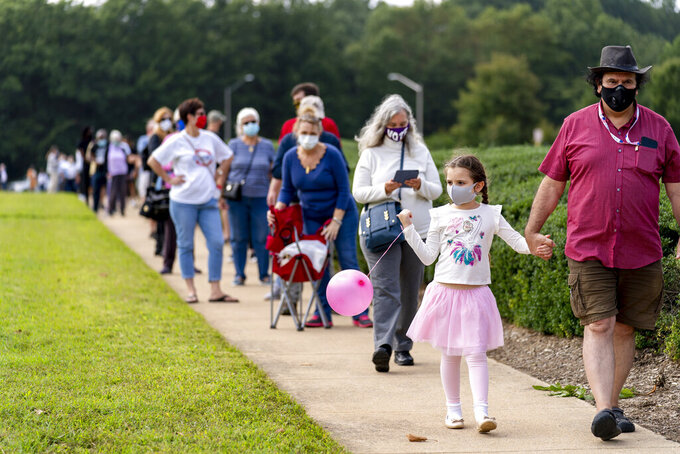 FILE- In this Sept. 18, 2020, file photo, Steven Daftarian of Fairfax, Va., and his daughter Laleh, 6, wait in a line stretching the equivalent of two football fields as hundreds line up for early voting at Fairfax County Government Center, in Fairfax, Va. Virginia voters this year will determine the staying power of a “blue wave” that flipped two competitive congressional districts two years ago, while also casting ballots for a U.S. Senate seat and the presidency. (AP Photo/Andrew Harnik, File)

RICHMOND, Va. (AP) — Virginia voters on Tuesday awarded the state’s 13 electoral votes to Democrat Joe Biden and returned Democrat Mark Warner to a third term in the U.S. Senate. The election will determine the staying power of a “blue wave” that flipped two competitive congressional districts in the state two years ago.

As in other states, voters were deciding between Republican President Donald Trump and Democratic former Vice President Joe Biden.

Virginia’s election featured three competitive House races, including two seats that were flipped from red to blue in 2018.

A guide to Election Day:

Once a key swing state, Virginia has been trending blue for years thanks to the growth of its more diverse and liberal suburban and urban areas. Trump’s unpopularity has helped accelerate Democratic gains.

Biden's victory contributes 13 electoral votes to the 270 he needs to win the presidency. Trump made noise about carrying Virginia, doing a quick campaign rally at the Newport News airport in September that drew thousands of supporters. Overall, though, the state was not a focus of either campaign. Republicans last won the presidential election here in 2004, when President George W. Bush defeated challenger John Kerry. While Virginia was considered a swing state as recently as 2012, it has trended sharply toward Democrats over the past decade.

Warner's victory came in a Senate race that garnered little attention compared to other states where much closer races could decide the balance of power in the upper chamber. He defeated Gade on Tuesday in a low-key race where the outcome was never in doubt. Democrats have not lost a statewide election in Virginia since 2009. Warner is a former governor and current vice chair of the Senate Intelligence Committee. He had a massive cash advantage and scared off well-known Republicans from running against him. The coronavirus pandemic and the presidential contest between Trump and Biden left little room for voters’ attention. And the highly contagious nature of the disease prevented both candidates from the stumping that defines traditional campaigns.

U.S. Reps. Abigail Spanberger and Elaine Luria were defending seats they flipped from red to blue two years ago when they won Trump-friendly districts and helped Democrats take control of the U.S. House.

Spanberger and Luria are part of a group of moderate Democrats who came to Congress with deep military and intelligence experience. Their credentials were instrumental in pushing the House to impeach Trump over allegations that he pressured Ukraine to investigate Biden.

Luria is a former U.S. Navy commander running against Republican Scott Taylor. Taylor is a former Navy SEAL who represented the 2nd Congressional District for one term before Luria defeated him in 2018.

The district spans the state’s Atlantic coast and includes Virginia Beach as well as the world’s largest Navy base, in Norfolk.

Spanberger, a former CIA operations officer, is defending her seat in the 7th Congressional District against Republican challenger Nick Freitas. Freitas is a delegate in Virginia’s House and a former U.S. Army Green Beret.

In the 5th District, a sprawling parcel the size of New Jersey that stretches from a tiny swath of the outer suburbs in northern Virginia through Charlottesville, all the way down to southside Virginia and the North Carolina border, Republican Bob Good defeated Democrat Cameron Webb. The seat was open after one-term Republican Rep. Denver Riggleman lost a nominating convention to Good. a cultural conservative and a former athletics official at Liberty University.

The libertarian-leaning Riggleman angered the GOP base in his district by officiating a same-sex wedding. While the district leans Republican, Webb, an African American physician and political newcomer, ran a strong campaign that gave Democrats hope of claiming the GOP-leaning district.

Voters approved a referendum that puts next year’s redistricting in Virginia in the hands of a bipartisan commission.

The amendment to the state constitution caps a yearslong effort by reformers looking to end partisan gerrymandering.

A bipartisan commission of citizens and legislators equally divided between Democrats and Republicans will now redraw the state’s congressional and General Assembly districts to conform with the 2020 Census.

Some Democrats had tried to defeat the measure, arguing that the changes keep politicians too involved in the process. Republicans said Democrats were simply trying to preserve the status quo now that they’re in power so they could draw the lines to their advantage.

The amendment turns over the task of drawing state and congressional maps, beginning with the 2021 redistricting, to a 16-member panel of eight legislators and eight citizens, evenly divided between Democrats and Republicans. The eight citizens would be chosen by judges from a list prepared by legislators.