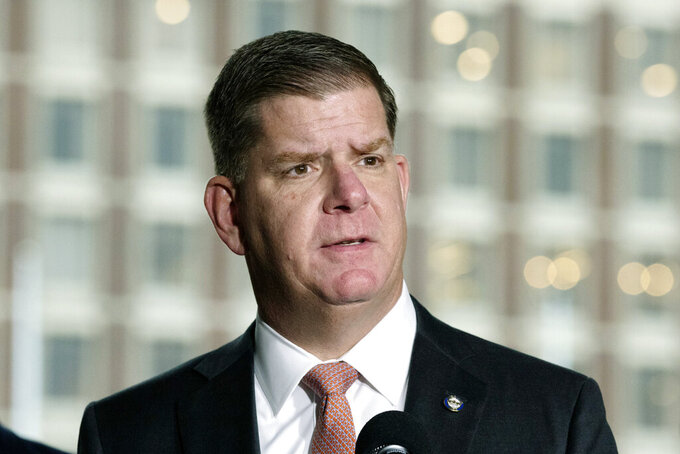 BOSTON (AP) — And just like that, the changing of the guard in the White House has shaken up New England politics.

Raimondo, a term-limited Democrat, is Biden's pick for commerce secretary while Walsh, a Democrat up for reelection this year, is his pick for labor secretary.

The selections still require U.S. Senate confirmation, but the announcement has immediate political implications for the region:

He would also have the power to pick a new lieutenant governor to serve out his term, though a bill filed this week would give state lawmakers that authority instead.

McKee's office didn't comment Thursday, but he told WPRI-TV recently he's ready to lead the state if his time came.

“My job is to always be prepared in that unlikely scenario,” he told the station. “I am prepared, and I’ve been working for the last six years to make sure that I am prepared.”

The former Cumberland mayor has had a strained relationship with Raimondo that's only become more pronounced during the coronavirus pandemic, which has hit the tiny state particularly hard.

In Rhode Island, the governor and lieutenant governor run separately, not as a joint ticket. McKee has been vocal about being left out of Raimondo's inner circle.

“I’m a backup quarterback that’s not part of a team," he complained to The Providence Journal over the summer. "I don’t even have a uniform.”

Who would run for governor in 2022 remains an open question.

McKee has said he intends to run, and at least two other statewide office holders, Secretary of State Nellie Gorbea and General Treasurer Seth Magaziner, have also been floated as potential candidates. All three are Democrats term-limited in their current positions.

For Republicans, outgoing Cranston Mayor Allan Fung ran twice unsuccessfully for governor — both times against Raimondo — and could decide the third time’s the charm.

“My fortune cookie said stay tuned,” Fung told the Journal in November. “Many surprises in store in the future.”

Janey, who was elected in 2017 and became council president last year, congratulated Walsh for his nomination and said she's ready to take the reins in City Hall when the time comes.

“His deep love for the City, and his dedication to working people and good jobs, have left a remarkable impact, and his legacy will show that dedication," she said in a statement of Walsh. "I look forward to working with the Walsh administration and my colleagues on the Council to ensure a smooth transition, as we address the unprecedented challenges facing our city.”

A native of Boston's historically Black Roxbury neighborhood, Janey will serve as acting mayor until a special election or until the next election in November. Under Boston’s charter, the council is required to call a special election if there is a vacancy in the mayor’s office before March, according to the secretary of the commonwealth’s office.

Walsh's sudden exit could also set off an election scramble.

The last time a Boston mayor declined to seek reelection — long-serving Democrat Thomas Menino — a dozen candidates vied for the seat. Walsh, then a state lawmaker, emerged from the scrum in 2014.

Two Democratic councilors who previously announced their campaigns for mayor congratulated Walsh on Thursday while also making the case for their candidacy.

“For Boston, there’s so much at stake in 2021 as we look to recover from this pandemic and reimagine what our city can be without persistent inequities,” Councilor Andrea Campbell said.