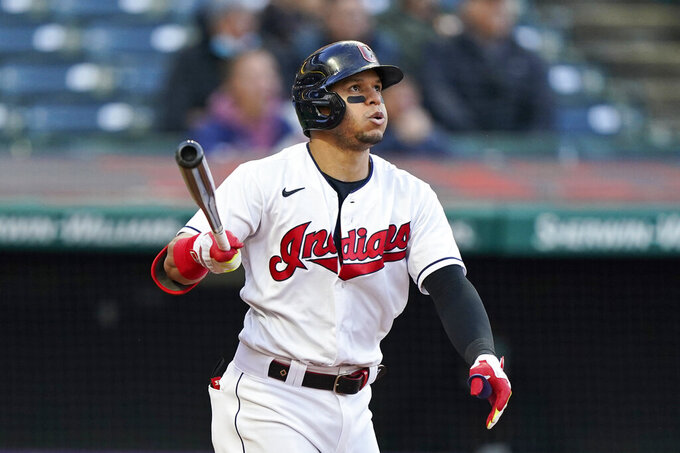 Cleveland Indians' Cesar Hernandez watches his ball after hitting a two-run home run in the fifth inning of a baseball game against the Chicago Cubs, Tuesday, May 11, 2021, in Cleveland. (AP Photo/Tony Dejak) 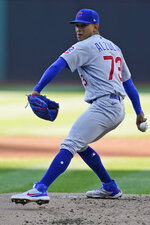 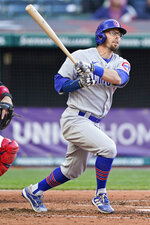 CLEVELAND (AP) — On a night when Shane Bieber's pitch count climbed much faster than his strikeout total, he still came out on top.

That's why he's an ace, an All-Star and the reigning Cy Young winner.

Bieber pitched out of some early trouble before extending his own strikeout record and César Hernández hit a two-run homer, sending the Indians to a 3-2 win over the Chicago Cubs on Tuesday.

Bieber (4-2) struck out eight and has now fanned at least that many in 20 consecutive starts, a major league mark he builds on every time out. The right-hander's streak was in jeopardy, but he got Nick Martini for strikeout No. 8 in the seventh — on his 117th pitch.

“He made some mistakes,” Francona said. “I also thought he threw some strikes maybe that weren’t called that didn’t help. That’s part of the game. But you look up and he’s 6 2/3 and two runs and pitched pretty damn good."

Bieber wasn’t as sharp as usual, giving up nine hits, a homer and needing a career-high 121 pitches to go 6 2-3 innings. But Bieber was satisfied and thankful for help — the Indians turned three double plays behind him and four overall.

“My stuff hasn’t been exceptional like the beginning of the year right now, so to be able to go out there and you got one goal in mind and that’s to win,” said Bieber, who has allowed four extra-base hits in his last two starts.

James Karinchak finished the seventh and worked the eighth. Emmanuel Clase gave up two singles in the ninth, but got Matt Duffy to bounce into a game-ending double play for his seventh save.

Hernández homered in the fifth off Adbert Alzolay (1-3), who matched Bieber for six innings.

José Ramírez added a solo homer for the up-and-down Indians, who have been no-hit twice but won seven of eight.

Eric Sogard homered for the Cubs, who made Bieber work hard and were close to chasing him several times.

“We had some really good at-bats throughout the game,” manager David Ross said. “We just didn't get something in the gap.”

With his pitch count climbing in the seventh, Bieber gave up a leadoff walk to Joc Pederson and then won a nine-pitch battle with Martini to increase his record. On the strikeout, Pederson was thrown out stealing by catcher Austin Hedges — a huge double play for Bieber.

With one out, Alzolay hit Andrés Giménez on the right hand with a pitch initially called a foul ball. Francona won a replay challenge, and after Giménez stole second, Hernández made Alzolay pay with his shot to right.

Sogard snapped a 1-1 tie in the fifth with his first homer since Aug. 29, when he was with the Milwaukee Brewers.

Bieber got ahead in the count and just missed striking out Sogard with a borderline 2-2 pitch that plate umpire Stu Scheurwater called a ball.

Sogard, who moved from second base to shortstop when starter Javier Báez was scratched with lower back tightness, then drove a 3-2 pitch that just ducked inside the right-field foul pole.

Pederson ripped his 94 mph fastball back at the right-hander, who alertly snagged the comebacker, which had an exit velocity of 112 mph.

“We thought that he might do that,” Bieber said. "I didn’t think he was going to come right back at me. Obviously it’s not like he was trying to. Just glad I caught it.”

Since moving Hernández into the leadoff spot on April 26, the Indians are 10-3 and outscoring opponents 63-47.

"His batting average is lower than he’s accustomed to,” Francona said. “But you watch, as it warms up, he’ll warm up. And he’ll get to his level and it will be fun to watch. He’ll get hot. He’s too good not to.”

Cubs star Kris Bryant was lifted in the sixth inning after not feeling well.

Ross said Bryant has been dealing with a sinus issue lately and that a “little bug” has been going around the team.

“Hopefully, it's nothing major,” Ross said.

SHOT IN THE ARMS

Francona said by Wednesday the Indians will reach the mandated 85% vaccination threshold, allowing them to ease some of MLB's protocols for COVID-19.

“You can back off wearing a mask in the dugout,” he said. “Guys can play cards on the plane as long as they have a mask on. They can eat indoors. It’s helpful to guys getting some sense of normalcy back.”

Cubs: Marisnick went on the 10-day injured list with a “mild to moderate” right hamstring strain. He's optimistic he'll be back soon. ... RHP Jake Arrieta (right thumb) was scheduled to throw a bullpen session in Cleveland. Barring any setbacks, he'll likely come off the IL this week.